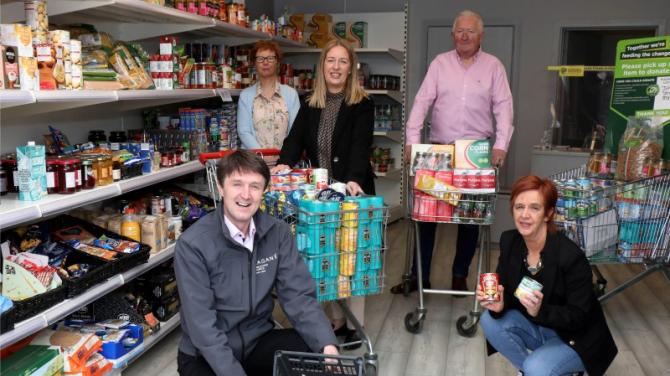 A BALLYCLARE homebuilder has donated £5,000 to Strabane Foodbank.

The funds have been pledged by Hagan Homes and comes as statistics reveal that the Derry City and Strabane and Belfast City Council areas are the biggest users of foodbanks.

The funds will boost the organisation’s drive to support the elderly and underprivileged in the area, to whom it distributes between 250 and 280 parcels a week.

Food parcels include non-perishable items such as tinned soup, beans, pasta and canned meat where possible however Hagan Home’s donation will allow it to provide those in need with fresh meat, poultry and vegetables as well as hygiene products.

The company began construction on its second development in Strabane in recent months - the £3.5m Old School Court project.

Speaking about the donation to Strabane Foodbank, Hagan Homes director of Sales and Acquisitions, Jim Burke, said:"Alarming statistics released by the Trussell Trust, the organisation behind 428 foobanks in the UK, showed that Northern Ireland is one of its biggest user areas, with the largest numbers of food parcels distributed in the Derry City and Strabane and Belfast City council areas.

"Those statistics read as a wake up call for many, including Hagan Homes."

He continued: "We are currently live on site at our Old School Court development in Strabane where we want to be more than just a sign above a building site but play a part in the community and to do this we are supporting Strabane Foodbank which has been tirelessly giving back to the community before and during what is one of the most challenging times in our living history.

“It is an honour for us to be able to help them with their admirable and relentless drive and we commend them for their selfless philanthropy.”

Speaking about the building firm’s donation, Ursula Doherty, manager, Strabane Foodbank said: "Hagan Homes’ donation is very much appreciated and will go a long way towards alleviating a lot of our foodbank problems.

"An example of how busy our foodbank has been in recent months is that since the second lockdown started in December, our weekly distribution numbers which range between 250-280 parcels.

“All our stock is donated by local supermarkets and local businesses. We also receive donations from local clubs but we are always in need of more and we are delighted that Hagan Homes has come on board to help.”

Creating 38 jobs during the construction phase, Old School Court on Orchard Road, is the Hagan Homes second development in the West Tyrone town.

The £3.5m Old School Court project will be home to 32, two-bed apartments with full turnkey specification. All properties will be completed by mid 2022.

This month will see the company open its show home at the site, where properties are priced from £105,000. In 2015 Hagan Homes built Printers House.

During a visit to Portavogie PS today, the Education Minister launched the NI100 Art Competition for schools.