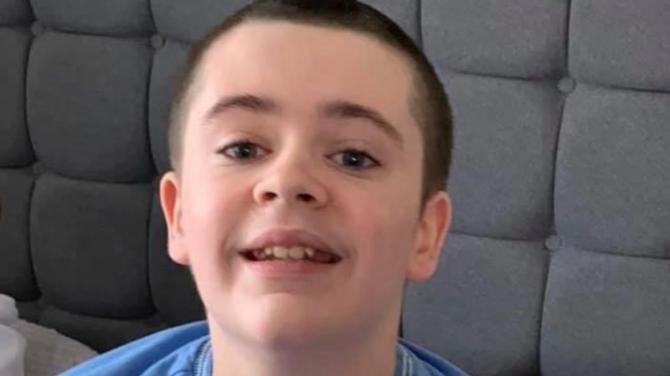 A STRABANE schoolboy is facing a race against time to have corrective surgery on a spinal condition.

Hayden Kelly, a pupil of Knockavoe School, has scoliosis - a condition where the spine develops abnormally and curves excessively in one direction.

It can affect people of any age, from babies to adults, but most often starts in children aged 10 to 15 and if left untreated, can cause damage to organs by putting pressure on them.

Despite Hayden's case being considered urgent due to the severity of the curve, he is unlikely to be seen soon on the NHS.

Thankfully however, the condition is treatable but lengthy waiting lists and the uncertainty posed by the COVID-19 pandemic, means he could be waiting years before the surgery can be carried out here.

Following months of uncertainty since his diagnosis, his family have now decided that their only option is to travel abroad to get him the help he needs.

To this end, they have embarked on a major fundraising campaign - under the banner of 'Hayden's Appeal' - in a bid to raise the much-need funds to allow Hayden to have the life-changing surgery carried out in Turkey.

His mum, Shauna Kildea, explained that initially she was told that Hayden had a 42 degree curve of his spine which is not considered an urgent situation at that stage, however it later transpired that it measures 60 degrees meaning his surgery is necessary and needs to be carried out as quickly as possible.

Until he gets that surgery, doctors have recommended that he wears a brace but it has been difficult for the schoolboy to adjust to it.

"Hayden was diagnosed with scoliosis back in September /October, which is a curvature of the spine," Shauna said.

"He is 12 years-old - a beautiful, smart, funny boy who has autism and attends Knockavoe School here in Strabane.

"After being sent for an X-ray in Derry we were told that he had an angle of 42 degrees which we later found was measured wrong and in fact, his curve was measuring at 60 degrees at the time.

"We found this out when we had to go private to see a consultant as the waiting lists here in Ireland are terrible.

"We were told his case was urgent but with waiting times the way they are, he could be waiting years for surgery even though he was classed as urgent and he was fitted with a Boston brace.

"As you imagine, the brace is causing a lot of pain and discomfort and with Hayden's sensory issues is tough getting him to wear it."

Shauna has found comfort in speaking with other parents going through the same experiences as her family, and she has also been able to speak to other parents through a scoliosis support page.

Having spoken with other local families whose children had the surgery, the family contacted Prof Dr Ahmet Alanay - one of the leading surgeons in both Turkey and the world on disorders of the spine.

He has agreed that Hayden is a priority case and his family are hoping Hayden can have his operation sooner rather than later.

Shauna continued: "After eight long months, Hayden growing at a fast rate and seeing so many success stories we decided the best option for Hayden was to make contact with Dr Alanay in Turkey.

"Dr Alany recommends Hayden needs surgery ASAP and said he would be happy to help!"

His family are now hoping to emulate the success of other fundraisers and raise the £50,000 needed to get Hayden to Turkey before his condition deteriorates further.

Since going live last week, donations for the appeal have poured in via a Go Fund Me page and a PayPal link.

Shauna says she and the family have been overwhelmed by the generosity.

"We desperately need help to help Hayden get to Turkey for his really important, life-changing operation before his health deteriorates any further.

"All donations - big or small - will be greatly appreciated and mean the world to us," she added.

As well as the fundraising links, Strabane and the wider community are coming together to raise funds through a number of initiatives, including raffles and a sponsored cycle, while collection buckets have also been placed in local shops.

If you would like to donate to Hayden's Appeal - no matter how little or large - you can do so by using these links:

Hayden's family say they are deeply appreciative of everyone who has donated so far and to all those who have offered to help in any way.

During a visit to Portavogie PS today, the Education Minister launched the NI100 Art Competition for schools.