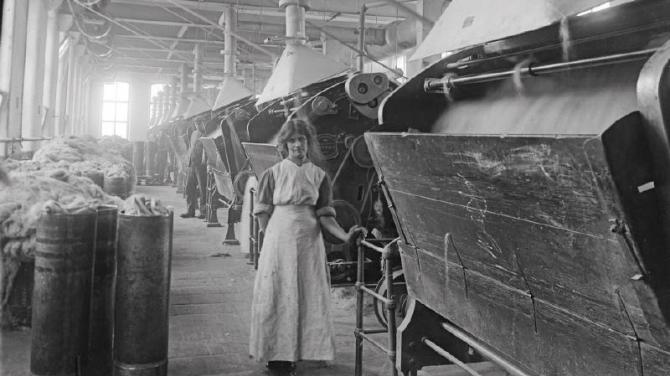 A NEW exhibition exploring the rich industrial and economic heritage of the North West's shirt factories and the role of those who worked in them has opened.

‘Shirts Singers and Sewing’ at the Tower Museum is the result of a partnership between the Inner City Trust and the Fashion and Textile Design Centre and will feature a number of artefacts and objects from the museum collection.

Free standing graphic panels will delve into the history and heritage of the sector, including references to many of the factories in Derry, Strabane and the linen industry in Sion Mills.

The exhibition will look at some of the notable people involved in the industry locally like William Tillie as well as the not so familiar, such as Sarah Doherty.

Objects and archives will also be on display from the collection, including sewing machines, shirts, photographs and scrap books.

Mayor of Derry City and Strabane District Council, councillor Brian Tierney, encouraged the public to see the exhibition for themselves which will be previewed online until restrictions permit the public to visit.

"The Shirts, Singers and Sewing exhibition will offer a fresh insight into the North West's rich shirt factory heritage with museum artefacts and the story of those involved in the industry locally," he said.

"Shirt factories and the men and women who worked in them were the economic backbone of our city and district for decades and I am delighted that more is being done to highlight that contribution and tell their story."

In the 1700s, Derry and the surrounding region prospered as a linen town and trading port and from the middle of the 1800s the city experienced an industrial revolution in distilling, shipbuilding and shirt making.

The city prospered in the textile trade for many years with factories dominating the cityscape.

A female workforce powered much of the industrial development and produced some of the finest shirts in the world.

The decline of the linen industry from the 1830s, played a significant role in the birth of the shirt industry in the region as there was a plentiful supply of skilled female labour.

The rapid growth of cities in Britain and the growing fashion towards cotton shirts favoured the establishment of a shirt industry.

The introduction of the factory system in the 1850s contributed to the city's expansion while the invention of the sewing machine in 1853 and the arrival of several Scottish businessmen ensured that the industry was factory based.

By 1900 the assembly line approach to shirt making increased effectiveness to meet global demand, with each worker specialising in a particular aspect of production.

To celebrate the opening of David Hogg's and Charles Mitchell's five-storey factory on Great James Street in 1898, a specially chartered steamer was hired to bring over guests from England.

Shirt making reached its peak in the 1920s when, together with their outworkers, 18,000 people were employed.

The city became one of the largest and well recognised producers of shirts across Europe.

The Tower Museum staff are very grateful for the support and encouragement from the Inner City Trust and the Fashion & Textile Design Centre and importantly the Friends of the Factories group in developing this exhibition.

For more on the exhibitions at the Tower Museum visit derrystrabane.com/towermuseum.

The Shirts Singers and Sewing exhibition can be viewed online at: