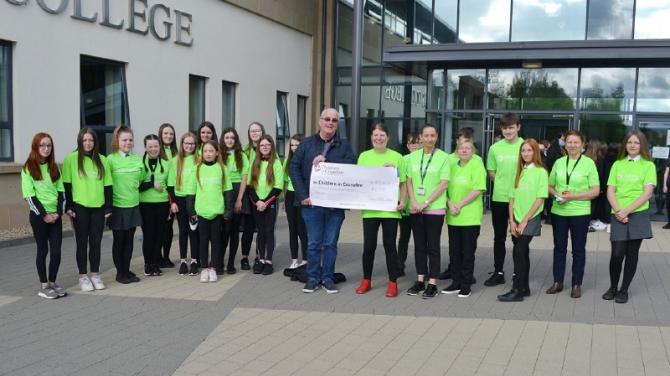 A LOCAL secondary school has raised over £6,000 for Children in Crossfire.

Throughout the month of March, pupils and staff from Holy Cross College took part in a challenge in aid of the charity with each participant walking or jogging 50 miles.

The school raised a grand total of £6,700 with pupil, Ronan Doherty, personally raising over £500.

Founded in 1996 by Richard Moore who was blinded as a 10 year-old boy in 1972 during the Troubles, Children in Crossfire supports projects helping some of the most vulnerable children on the planet that suffer from the injustice of poverty.

It works in partnership with local organisations in Tanzania and Ethiopia to improve the lives of the most disadvantaged young children, with a particular focus on Early Childhood Education (ECE).

In Ireland, the charity works in schools and with the general public to raise awareness of global justice issues, and advocate for increased investment in ECE.

"By improving early childhood care we are changing lives and empowering young children and their communities to build a better future," it says.

Teacher Bernie Ryan co-ordinated the fundraising efforts said the school was delighted to support such a worthy charity.

"We were delighted when Children in Crossfire came up with this challenge at a time when motivation and positivity needed a boost," she said.

"We are proud of the miles covered and thrilled at the amount of money raised.

"This shows the Strabane community – and our young people in particular – at its very best.”

Mr Moore who is the charity's executive director recently attended the school to collect the proceeds and thank all those who took part in the challenge.

He said: "Children in Crossfire’s international programmes provide life-changing opportunities for some of the world’s most vulnerable children, in Ethiopia and Tanzania.

"I always find it extremely uplifting when young people here raise funds to support children growing up on the other side of the world.

"That shows terrific empathy and kindness – wonderful values to instil from an early age.

“Holy Cross are brilliant Children in Crossfire supporters and it was amazing that so many pupils took part and raised so much.

"There was plenty of bad weather in March, so it took dedication to keep going through the cold and rain. £6,700 is an incredible fundraising total and the entire Holy Cross community should be very proud of their outstanding achievement.

"We are very grateful for their continued goodwill.”

School principal, Clare Bradley, also thanked Mrs Ryan for organising the event and Mr Moore for his attendance at the presentation.