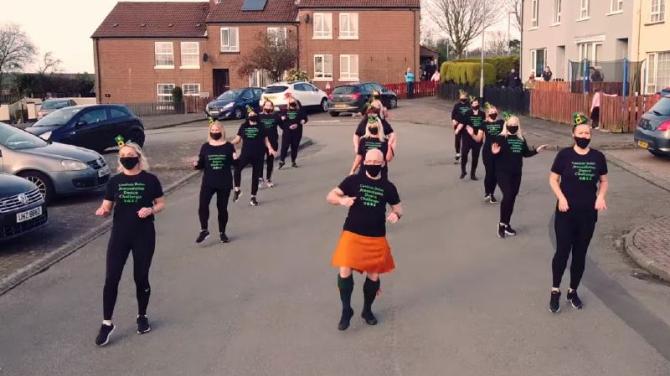 IT'S the dance that has captured the imaginations of residents across the district, bringing some much-needed relief during these uncertain times and raising funds for charity.

Several housing estates and community groups across Strabane and the surrounding area took on the Jerusalema challenge earlier this month in a bid to raise funds for NHS staff.

All the routines, which were carried out within social distancing guidelines, were recorded and uploaded to Facebook with Mayor of Derry City and Strabane District Council, Brian Tierney, then given the unenviable task of judging the submissions and declaring the winners.

The Mayor said he was "very impressed" with all the videos but the entry by Carlton Drive residents caught his eye and he duly declared them the winners.

But it's not just about the competition.

All proceeds raised from the charity endeavours will ultimately be donated to the Nurses Comfort Fund at Altnagelvin Hospital.

The Mayor said: "It was a privilege to be asked to judge the Jerusalema dance challenge entries from many of the local housing estates and community associations in Strabane and the surrounding areas.

"The challenge was laid down as a way for communities to safely connect and have fun, and to raise money for a very worthwhile cause – the Nurses Comfort Fund at Altnagelvin Hospital.

"Congratulations to my winner, Carlton Drive, and a big well done to everyone who took part."

He also paid tribute to the community spirit displayed.

"What stood out for me is that it wasn't just the dancers that were involved.

"Many of the areas brought out their entire community and got them involved which is something that we've been lacking due to the COVID-19 pandemic so it was great to be able see that on screen.

“It's unfortunate that I wasn't there to watch it all in person."

The Mayor will now be sending a prize to each area who participated.

“I'm going to be sending out a prize to everyone who competed. It was a great initiative to see happening across the Derry and Strabane Council area.

"Well done to everyone - all for a great cause and I'm sure everything within the NHS appreciates all of the hard work and the fundraising efforts."