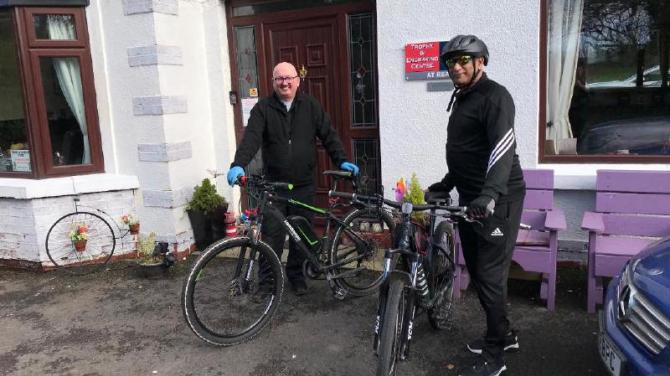 CRICKETERS from across the North West are getting on their bikes as part of a fundraising drive for Andrew 'Patto' Patterson.

Andrew, who has enjoyed a long and successful career with Ireland, Northern Ireland and in England with Surrey, was diagnosed in 2013 with the rare hereditary condition Spastic Paraplegia.

Over the past eight years the 45-year-old's condition has gradually deteriorated to the point where he is now facing wheelchair confinement.

In a bid to support him, Andrew's friends at Cliftonville Cricket Club, the Northern Cricket Union and here in the North West are planning a 24 hour cycle.

The money raised will pay for the necessary renovations to his home and to adapt his garden so that he can continue to enjoy a good quality of life with his wife and their two children.

The North West leg of the 'Pedal 4 Patto' fundraiser begins at 9am on April 23 when a volunteer will cycle from Sion Mills to Strabane.

The relay continues from there to Ballymagorry and onwards as a cricketer from each individual club in the North West Cricket Union bikes a stage of the 113km route.

The goal will be to reach Muckamore in County Antrim where they will link up on April 24 with cricketers from the Northern Cricket Union who are cycling 400km.

North West cricketers Desmond 'Dekker' Curry and Andrew Riddles played with Andrew Patterson and have therefore committed to completing the entire trip from Sion Mills to Muckamore, joined at each stage by a club member.

Accompanying them on the Strabane to Ballymagorry leg of the journey will be former Indian Test player and veteran Irish coach Bobby Rao.

He will complete his contribution on a bike sponsored by local firm BP Cycles.

“I coached Andrew when he was a youngster and I was his batting coach when he played with the Ireland squad so I've known him for many years,” said Bobby.

“When I heard about how his friends in the Northern Cricket Union were organising Pedal 4 Patto, I felt that it would be nice to involve the clubs here in the North West too.

"Andy is a fellow cricketer and I feel it is important that we show him we care and that we are here for him.”

A second aspect is giving people something to focus on during the Covid crisis, said Bobby.

“This pandemic has taken so much out of people. With cricket training due to resume in April and the season likely to start soon after, this is a way for clubs to reconnect.

"By getting involved, the North West Cricket Union is supporting our friends in the Northern Cricket Union and no doubt if we ever need a similar helping hand they will be there for us.”

A 'Pedal 4 Patto North West' Go Fund Me page has been set up.

To donate go to www.gofundme.com and search for Pedal 4 Patto North West.