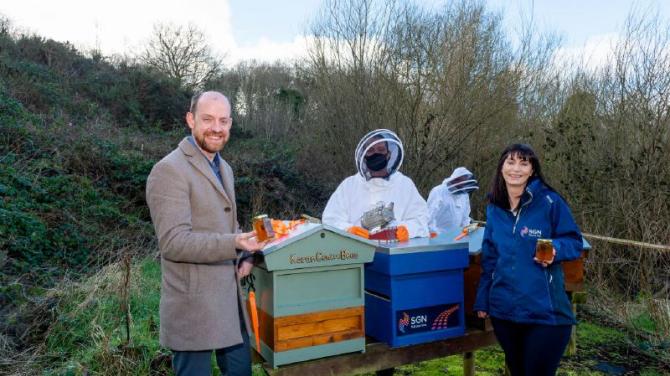 NORTHERN Ireland’s newest natural gas operator has announced major biodiversity plans which include investing in a community beekeeping programme across eight key towns and planting 7,000 trees in the heart of its network in the west.

The initiatives are just the beginning of long-term plans by SGN Natural Gas which will help enable local residents to set up their own apiaries and become sustainable social enterprises producing honey for sale in their local areas.

The opportunity to become beekeepers was first offered to residents in the Strabane area in 2019 as part of a community engagement programme when the new gas network was first under construction.

The initiative has since gone from strength-to-strength and participants in seven other key towns are now buzzing at the prospect of completing accredited beekeeping courses with the help of local beekeeper associations and CAFRE online via Zoom.

The Strabane hives are located at the Tulacorr Allotments which is part of the Koram Centre, a local counselling support service for Strabane and the surrounding areas.

Adrian Loughrey, Manager of the Koram Centre, explained: “Our outdoor space includes 27 plots and nine raised beds for members to make use of, which has been more important than ever in recent months and we feel lucky to have remained open in line with public health guidelines.

"We are delighted to receive the support from SGN Natural Gas.

"The funding has allowed us to develop beekeeping facilities at the Tulacorr Allotment site, including a number of our members undertaking beekeeping training courses.

"Bee hives are now tended to every year with the honey produced sold as part of our social enterprise activities.

"It is great to see businesses getting involved with local communities in this way.”

From bees to trees!

SGN Natural Gas has also been involved in the recent planting of almost 4,000 native Irish oak, hazel and birch trees in Co Fermanagh.

The project is being overseen by IndiWoods, the woodland consultancy which has planted over one million trees in Northern Ireland during the past 16 years.

A further 3,000 trees will be planted in the heart of the network in Mid Ulster by the end of 2021. Bug motels will also be gifted to 70 primary schools in April.

The founder of IndiWoods, Carolyn Trimble, said: “IndiWoods is delighted to have planted a mixture of 3,700 native Irish oak, hazel and birch in a Fermanagh woodland, with the support of SGN Natural Gas.

"The trees were planted in an existing 12-year-old plantation which has recently suffered from Ash Dieback, a disease which has made its way across Europe and is now prevalent throughout Northern Ireland, unfortunately killing our ash trees.

"To help make the woodland more resilient for the future, we have planted Irish provenance trees which will be a great asset to the area and provide a valuable habitat for local wildlife, including the red squirrels.”

Director of SGN Natural Gas, David Butler, said he was delighted the company was engaged in initiatives that can help sustain biodiversity in the network and wider region.

He said: “The bee hives we helped set up in Strabane have proved to be a real local success story and we are looking forward to bringing more hives to communities across the network in the near future.

"The importance of planting trees to help preserve biodiversity and our local habitats also cannot be over emphasised and we wish to thank everyone who has come on board with us to support these exciting initiatives in the towns we serve.”

“The SGN Natural Gas network can ultimately play a vital role in decarbonisation, removing millions of tonnes of CO2 from the west of Northern Ireland where oil/solid fuel use is prevalent.

"The project has an innovative network design ensuring there is now a clear pathway to a fully decarbonised, hydrogen-ready future for Northern Ireland that can deliver significant environmental benefits for everyone as we all ultimately move to a target net-zero carbon environment by 2050.”