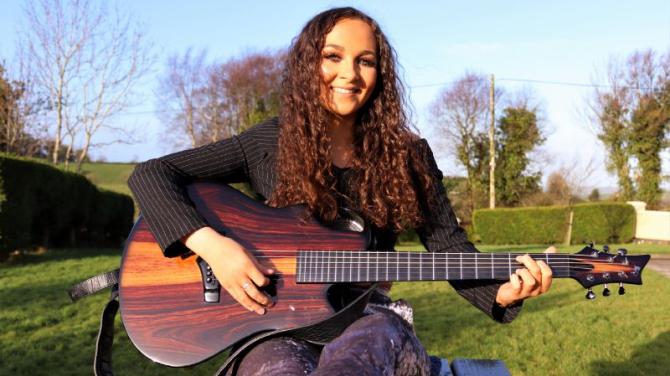 STRABANE singer Jamie Donnelly is counting down the days until the official launch of her new album.

Entitled 'The County In Me', the 12 track CD is the talented 20 year-old's second album release and features a mixture of cover songs and original tracks.

Speaking ahead of the launch, an excited Jamie said: "I'm absolutely delighted to finally be releasing the album.

"I've been working on it for the last few years and I'm thrilled to see it now come to life.

"It was really finished last year but with the pandemic, I had to hold back it's release.

That virtual launch is taking place on March 27 at 8pm with a concert also featuring guests David James, Patricia Maguire and Jason McGilligan while Matrimony will provide the backing band.

Hosted by Rockytop Productions, the evening will be compered by Andrew Crawford and Chrissy Mac.

Jamie hopes there will be something for everyone to enjoy on the album.

"There are 12 tracks on the album including three songs that are my own. I've co-written one of those songs while the other two were written for me," she continued.

"It's nerve-wracking but very exciting to have my own music on it as well.

"I'm really looking forward to seeing how people respond to it.

"Family members who have already listened to it have told me it's really lifted their mood.

"With the tough times we're in, I hope it does the same for others."

The album also marks a departure in sound from her 2017 album - Together You and I'- which featured five cover songs.

"My first album came out in the summer of 2017 and that was all covers.

"Since then I've recorded in four different studios over the years, trying to discover my sound," she said.

"Together You and I was a mixture of genres from pop rock, easy listening and a bit of country and this is much more country.

"I would describe this new album as country with a bit of a twist. There's some traditional Irish country, then American contemporary country and then there are some folk-like songs.

"I've tried to make it appeal to all age groups. Even if people are not a massive fan of country, hopefully there's something on there for everyone.

"Every song in it's own way is personal to me so I'm really proud of how it's finished."

The launch event which is taking place in a venue in Ballinamallard, Co Fermanagh, will also mark a return to the live stage for Jamie.

"Throughout lockdown I've done a few Facebook Live shows but you can't compare that to being on stage.

"Since I've released my original music, I haven't been able to perform it so I'm looking forward to being up on the stage with the live band behind me and performing tracks from the album."

One of the singles on the album, ‘Soapbox’, reached number one in the Irish Country Music Charts within hours of its release last year and Jamie's music is getting world wide radio play in countries such as Canada, Australia, New Zealand, France, the UK alongside Ireland.

The future is certainly looking bright for the young songstress who is currently studying music at Queen's University Belfast.

"Whatever I end up doing, it will definitely be related to music," she said.

"I would love to get a band behind me, get on the road and do more of my own shows down the line.

"I'm also planning on getting back into the studios and working on more new music.

"I miss the interaction with people of being out and performing live. It has been hard but hopefully soon there will be some normality.

"I would just like to thank everyone for all their support so far. The town has always been really supportive of me through the years and I'm so grateful for that."

If you would like to attend the virtual launch of Jamie's new album, you can find details on her Facebook page - Jamie Donnelly Music.

Following the launch, the CD will also be available to purchase from her website: