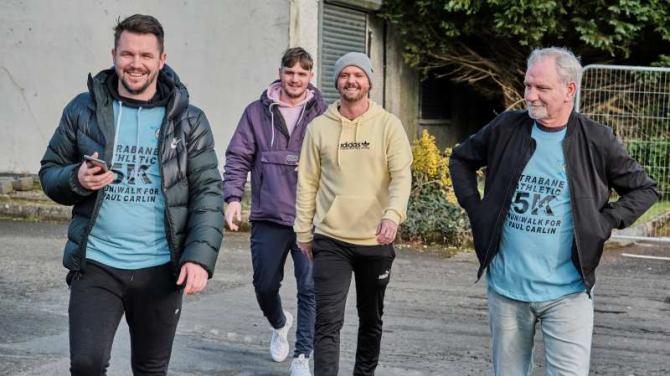 A MAJOR fundraising drive for a young local man who is battling cancer for a third time has raised over £30,000 so far.

Paul Carlin is currently receiving treatment for Non-Hodgkin Lymphoma, an illness that he has faced down twice before.

The 34-year-old had been clear of the disease for 13 years but it returned in October.

The popular Strabane man, who had settled and made a life for himself in Manchester, has since returned home to the town following his diagnosis.

Determined to help, his younger brother Conor, supported by friends at Strabane Athletic Football Club, Aaron Porter and Conal Crawford, launched a major fundraising campaign to assist the family with the expenses they face as Paul undergoes intensive treatment.

Donations have poured in via a GoFundMe page with thousands raised so far.

A number of fundraisers have already taken place across the town, including the hugely successful 5K walk/run organised by Strabane Athletic on Saturday.

The event, which had staggered times to allow participants to socially distance, helped raise £5,099 for the appeal.

Speaking afterwards, Conor thanked all those involved in making Saturday a success.

He said his family are greatly appreciative to the local community for the continuing support.

"I'm in awe of the response of this town and their generosity.

"It's been a long month but an unbelievable experience to witness firsthand how this small town can come together...

"I'm sure I speak for my family when I say thank you. You've all been amazing," he said.

Countless other fundraisers including raffles and bonus balls draws have been ongoing while a mammoth 24-hour run organised by Adrian 'Rusty' Crossan featuring a number of runners, raised a staggering £5,664.

Elsewhere, a local councillor has also raised over £2,500 for the fundraising drive.

Battling the elements, he ran from the council offices in the city to the Derry Road offices in the town, some 14 miles in total raising a confirmed total of £2,565.

To donate to the Paul Carlin appeal, go to:

At the time of going to press yesterday (Tuesday), a total of £31,600 had been raised to date.