Talented young musician has high hopes for the future 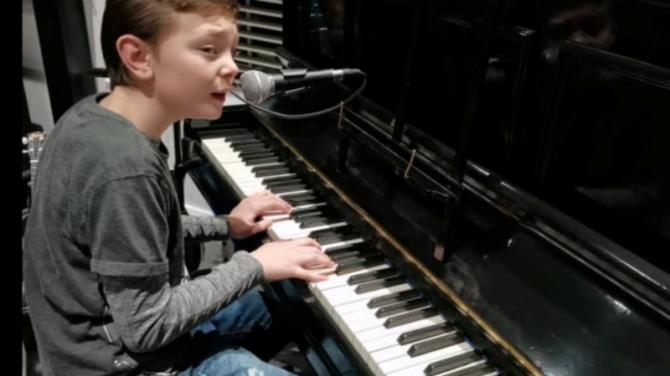 AGED just nine-years-old, Kris Friel is a bundle of musical talent with high hopes for the future.

From making star appearances on television to going viral with his singing, the talented schoolboy from Lifford is a star in the making.

And while many have been enjoying some downtime during lockdown, young Kris has been busy building on his impressive repertoire of skills, and all while excelling at his school work via remote learning.

"Lockdown hasn't stopped him," proud mum Veronica said this week. "He has been keeping himself occupied and is always looking to learn something new.

"All this week he has been doing an online music course with the Nerve Centre which involves songwriting and playing his instruments.

"It has been a great course and it's also been a good learning curve for him, working with others.

"He's really enjoying it and taking in so much. He just loves challenging himself and tackles everything with 100 per cent dedication."

An accomplished musician, Kris plays a number of different instruments including piano, guitar, the ukulele and the banjo.

More recently he completed his grade three LCM on piano - gaining a distinction with a remarkable 99 per cent mark!

"This is the second lockdown exam that he has done," Veronica continued. "He only turned nine in June and to have achieved a distinction with 99 per cent marks, it's unbelievable especially at such a high grade.

"He underwent the exam in October last year, but due to the backlog with online results, he received his marks last week.

"He is delighted and we are just so proud of him.

"He really deserves it as he has been working hard and has been so dedicated during lockdown. He has been practising non-stop on all his pieces.

"By the time he gets to secondary school, Kris hopes to be at grade six but that might be more difficult as he hasn't been able to get back to his actual piano lessons.

"A huge thank you to his piano teacher, Marie, who is just so supportive of him."

A pupil of St Columba's Primary School in Clady, Kris has been keeping up with his lessons via the online Zoom platform, but is looking forward to getting back to school.

"Alongside his music, he has been busy keeping up with his schoolwork.

"In the same week as his piano result, he was received 'Pupil of the Week' for all his hard work so it was a double treat for him!

"He can't wait to get back to school. He just loves it at St Columba's and the school have also been very supportive of him too," Veronica continued.

Elsewhere during lockdown, Kris has been involved in a number of virtual performances with the Allegro Youth Choir.

He was also named the winner of the Summer Jamm Busking Competition in Strabane last June with his online performance gaining over 18,000 views and earning him a £100 prize.

Kris is a member of Castlederg-based Much Ado Stage School where he does drama and singing lessons in the group's Strabane classes.

While he has been missing the face-to-face performing, Veronica says he has adapted well and is taking it all in his stride.

"At Christmas he took part in a virtual concert - 'Sing Out to Help Out' - with a number of other artists to bring some festive cheer to all residents in care homes and then he took part in an online indoor festival in July (Act-In Performing Arts Festival), so he's been very busy but enjoying it all," his proud mum continued.

"Belfast Live also shared his performance of 'Imagine' recently and he got some lovely feedback. He also did a lovely version of 'O Holy Night' for Christmas.

"He misses his lessons face-to-face but he has adapted well to the online things - he's just happy to perform in any setting.

"He's been keeping up with all his music lessons throughout. We couldn't be more proud of him and all that he has achieved so far at such a young age.

"I just love watching him perform and every couple of months I see a difference in his development as he takes on new ideas but he surprises me every time with what he can do.

"He's not afraid to try anything new and he just wants to keep learning.

"Even though he loves performing and is very talented, he's still very shy and modest.

"He never has an instrument out of his hands be it playing piano, the ukelele, guitar or banjo."

Kris also has his own YouTube where his performances are regularly posted.

He is also on the books of Co Armagh outfit - Rising Talent Agency - Northern Ireland’s only dedicated acting agency for young people for acting and singing roles.

"There has been an odd voiceover so far, but you never know what more could come out of it," Veronica said.

"In a couple of weeks he has to go and do a voice reel. It's just waiting to see what comes from it - as long as it is right for Kris.

"We set up the YouTube channel as well so he could share his music and covers, and he just loves it getting his music out there."

For now until restrictions lift, Veronica says Kris is determined to keep practising as much as he can as he continues his musical journey.

To see his impressive performances, log on to: https://www.youtube.com/channel/

Or, visit his profile at Rising Talent: https://risingtalent.uk/talent/kris-friel-2/