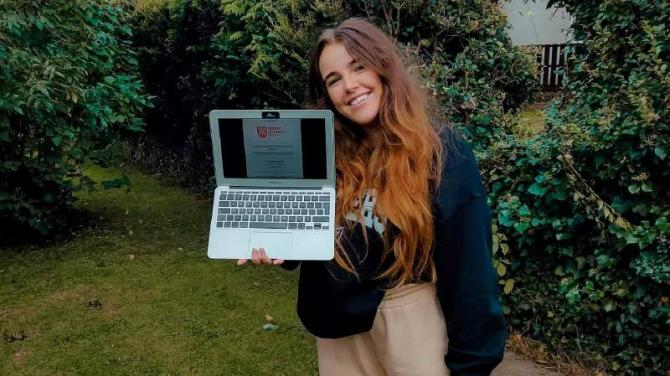 A STUDENT from Strabane is the first young person from Ireland to be awarded a special scholarship from the Lord Mayor of the City of London, enabling students and young executives to travel to the UK to pursue a career in the financial services or professional sectors.

Megan Edwards impressed the judging panel of the Mansion House Scholarship Scheme with her passion for human and civil rights, and is hoping the award will open up doors in the city where she is keen to pursue her dream of becoming a human rights barrister.

Over 180 scholarships have been awarded over the past 21 years, with scholars selected in 66 countries from across the world.

But Megan is the first recipient from these shores to receive the esteemed award.

Like many young people the Strabane student isn't where she expected to be this year.

Coronavirus has meant a diversion in her plans to study for the post graduate Bar Practice Course (BPC) at Northumbria University in Newcastle.

Instead Megan is back at home in Tyrone with her parents Kate and Mickey and her younger siblings, where she continues her studies, something that while unexpected, has given her the opportunity to spend some quality time with them for the first time in years.

Despite the deviation from her plans, Megan's sights still remain firmly on success and an ambition born from her experiences growing up in Northern Ireland where civil rights and human rights have been the key drivers of social and economic change.

She explained more about her journey and how she hopes the scholarship will further her on the path to success.

"After I left Strabane Academy, I headed off to Queen's University in Belfast where I initially opted to study medicine," she recalls.

"After a year I realised that it wasn't the career path I really wanted to follow, and because of my strong interest in civil and human rights I realised I was drawn to law.

"So I changed to a degree in law, and went on to complete my Masters in 2020.

"I was also lucky enough to be awarded the James MacQuitty Scholarship, which allowed me to extend my studies beyond undergraduate level."

Megan continued: "When I was at Queen's I was involved in the Widening Participation Unit (WPU) as a student assistant, which gave me the opportunity to work with a team dedicated to helping younger students gain access to education and realise their ambitions.

"The Unit enables those who are 'most able but least likely' aspire to Higher Education and fulfil their potential, regardless of background, and it was such a rewarding experience.

"My supervisor from the unit actually initially contacted me about the Mansion House Scholarship so I submitted an application and was actually called for interview in July."

Megan impressed the judges not only with her academic achievements, but with her active role in student life and her belief in initiating change through the law.

She secured a scholarship of £10,000 which is now covering the cost of her post-graduate Bar Practice Course with the Northumbria University.

Under normal circumstances Megan would be studying at the university, and the scholarship would also cover the costs associated with completing ten qualifying sessions with an Inn of Court in London.

But instead Megan is making the most of her time at home, and looking ahead to the future.

"My plans have definitely had to change and it is a pity that I'm missing out on some of the opportunities the scholarship would normally present," she admits.

"But it's still a fantastic scheme and one that I'm really making the most of.

"Normally I would be travelling to London and meeting up with the other scholars, some of whom are from Mexico and one each from Nigeria and from India, which obviously isn't possible at the moment.

"We've had meetings over Zoom and last week I had an online meeting with the Irish Society Trustees, which was really interesting.

"I'm hoping that I'll have other networking opportunities before the scholarship year ends.

"In the meantime I'm enjoying the time at home with my family. I've had the opportunity to travel and study abroad and obviously I've been living away from home for a number of years now.

"So this is the first time I've been able to enjoy living at home as an adult and really spend time with my family.

"Since I was a child growing up in Strabane I've always been socially aware and fascinated by the civil rights history of our country.

"That has been ingrained in me and I suppose most people who grow up here. I really want to channel that interest and passion into making a difference by pursuing a career in human rights and I've been so lucky so far.

"I realise that this wouldn't have been possible without the support I've received through these scholarships, and it makes me even more determined to do well in recognition of the belief people have shown in me."

The Mansion House Scholarship is supported by Livery Company donations and other donors in the City of London who also offer mentoring opportunities to recipients.

It's hoped that in the coming months Megan will be able to avail of some of these opportunities and the Mayor of Derry City and Strabane District, councillor Brian Tierney, is also planning to host a reception for the talented student when the restrictions allow.

Mayor Tierney said that Megan was a fantastic ambassador for the city and district and a great example to other young people with similar ambitions.

"It's always so encouraging to see young people from Derry and Strabane fulfilling their potential. Megan is a great example of someone who is making the most of the opportunities that are out there to realise her ambitions," he said.

"I know she will be a strong advocate for human rights and I hope that when she has completed her studies Megan chooses to pursue a career in human rights law closer to home where there is still much to be done to tackle social injustice and promote positive change.

"I look forward to welcoming Megan and her family to the Guildhall to extend my personal congratulations at the earliest opportunity."

Links between the City of London and the council area extend back to 1613 focusing most recently on the cities' shared interests in business, commerce and education.

The Honourable the Irish Society is a charitable organisation that has actively been strengthening those connections by supporting a wide range of cross-community projects, channelling £230,000 into the area over the past year.

Edward Montgomery, secretary and representative (Ireland) of The Honourable the Irish Society, said he was delighted to see someone from Derry and Strabane become a recipient and said that the Lord Mayor of the City of London, Alderman William Russell, is also keen to arrange a visit for Megan to the Mansion House when possible.

"The Scholarship Scheme was designed with exactly the sort of student represented by Megan in mind, and the Irish Society trustees had been most impressed by her evident abilities and determination to succeed, against a particularly difficult background with the global pandemic," he explained.

He concluded by saying the Society would continue to promote the historic links between London and the North West of Northern Ireland through its charitable programmes and networking and hoped that Megan's success would encourage other young people to apply for the Mansion House Scholarship in due course.