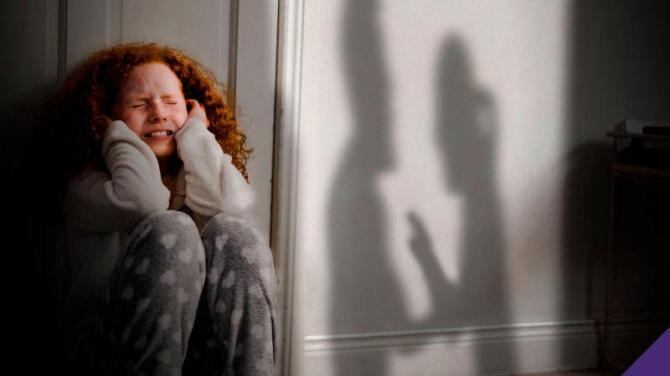 Meaghan McKee (11), a pupil of St Patrick's Primary School in the town and Grace O'Carolan (18), a pupil of Sacred Heart College, Omagh, are currently starring in the Crimestoppers advertisement.

The campaign is encouraging anyone who is aware of domestic abuse happening to contact the Crimestoppers charity, which is 100 per cent anonymous.

The girls were selected a few months ago to take part in the online film, which is available to view of YouTube, in a socially distanced environment.

The talented pair are students of the Much Ado Stage School run by Rois Kelly-Lynch, who is understandably proud of her young charges.

"We had initially worked with Niall Carlin from Doublejump for our 'Your Words' anti-bullying video last year," Rois explained.

"He has a film company in Belfast and was approached by Crimestoppers to film the campaign.

"The casting was originally for actors in Belfast but having worked with us in the past, Niall said he knew of an amazing group of kids.

"So, he suggested that our Much Ado students could take part in the casting for the child and teenager roles."

A series of socially-distanced auditions were held in the Much Ado studio with around 45 students taking part.

"They were all amazing with a very high standard," Rois continued. "There was so much talent on the day.

"Niall filmed each audition and sent off the clips to the company that had hired him and they selected Meaghan and Grace.

"Filming for the campaign took place the following week in Belfast then so it was a very quick turnaround.

"The girls absolutely loved being a part of the whole process. We were just delighted for them.

"We are still closed due to the restrictions, but it's great to keep working away in the background with things like this."

The campaign is currently running on billboards across Northern Ireland and online.

"Domestic violence is such an important issue, particularly now during the lockdown.

"Meaghan and Grace did an outstanding job," Rois continued.

"They're just delighted to have played a role in such a poignant and hard-hitting campaign.

"The production and filming team were beyond impressed with the girls' maturity and commented how easy it was to direct them.

"With no scripted lines or words to say they had to really heighten their acting skills yet remain natural."

Since going live, the online video has attracted hundreds of views while Rois has been overwhelmed by the response.

"I knew the video was going to be excellent but I couldn't believe it when I watched it. I had goosebumps watching it," she said.

"The message is so strong and delivered so professionally by all involved. The response to it has been amazing.

"I've had so many messages from people saying how important it is to raise the issue, and sharing the impact it's had on them."

While available to view online, there is every possibility that the film may eventually make it on to the television.

"The image of Meaghan is currently featured on billboards throughout Belfast, while the film is online.

"Whether it will be commissioned to TV or not, I don't know. It usually starts off with a smaller campaign, and then builds momentum.

"I'd like to think it will make TV. It's very hard-hitting.

"All in all, it was a positive experience for the girls and we are so, so proud," Rois added.