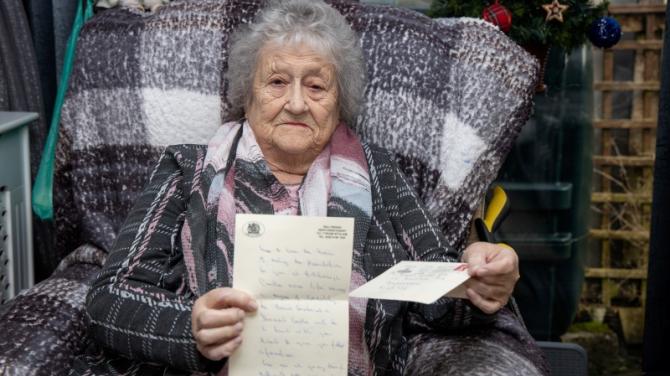 A LOCAL woman named in the Queen's New Year Honours has spoken of her pride in accepting the "exceptional" accolade.

Margaret (Gretta) Campbell, from Magheramason, was awarded the British Empire Medal (BEM) for services to pipe bands and Sollus Highland Dancers in Bready.

The unassuming 84 year-old, known to all at Sollus and further afield as 'Granny Campbell', is the chief seamstress and a vital cog in the dance troupe.

She makes all the costumes for the group saving a lot of time and money.

Not only that, but she has stitched and sewed innumerable items over the years from pipe and flute band kits to cricket and school jumpers, her children's clothes and much more!

In 2008 she also made 40 outfits for the dancers performing at the world famous Royal Edinburgh Military Tattoo.

Quite an accolade as this was watched by over 100 million television viewers and a live audience of 240,000.

"It's a great honour," Gretta said of her award. "I've always had an interest in helping anyone who needed something fixed or made."

For Gretta, a self-taught talent which started when she was a teenager soon became her life's work and she has no intention of slowing down anytime soon.

"Sewing and knitting is my life. I love working with the tartan," she said.

"It all started when I was around 14-and-a-half. I altered Bready Pipe Band's old kilts by turning the kilts to make them nice and fresh.

"I done that and I just got addicted to it then. Over the years, I've also done many kilts for bands down in Raphoe, Manorcunningham, Finn Valley, Convoy, Plumbridge, Drumquin - all over.

"I'm very proud to have worked in the factories. In those days, the boys went to farms and the girls went to factories. That was life then.

"I worked making shirts at Welsh Margetson and I also worked in Porters up in Strabane.

"I loved the factories and loved the sewing. I still sew and knit every day. If there is a baby boom, I have hundreds of cardigans!"

Her skills have also kept her busy during lockdown when she began dressing teddy bears in tribute to NHS workers with leftover pieces of tartan.

The bears, which came complete with scrubs, masks and rainbow badges, were sent into hospital wards and donations from their sale went towards Captain Tom Moore's fundraising efforts.

Originally from the Curleyhill area of Strabane, Gretta married Bready man, Leslie Campbell and the pair settled in Magheramason and had seven children.

To the local community, their contribution over the years has been immeasurable.

"My husband, Leslie, who passed away in September 2019, was a pipe band man through and through.

"When he took unwell with Parkinsons and Alzheimer's, I kept on making the kilts. He just loved to see me making them.

"He would be very, very proud (about the BEM)," Gretta added.

Although the identity of who nominated Gretta remains unknown, it's believed she came to attention when the Sollus Highland Dancers were honoured with the Queen’s Award for Voluntary Service earlier this year.

During the subsequent conversations, much centred around the contribution of 'Granny Campbell' to the group, which is celebrating its 20th birthday this year.

For the team at Sollus it's impossible to put a monetary value on what she has given them over the years.

"We're all very proud of granny - she's an expert at what she does. Both her and granda have given so much to this community," said granddaughter Georgina Kee-McCarter.

"The dance group celebrates 20 years this year and I don't think we would have the group if it wasn't for her.

"Dance costumes are so expensive but granny rips the old kilts apart, turns them inside out and puts them back together again like new.

"She has been making and altering all ours from day one, saving families a lot of money. You can't get kilts like Granny Campbell's kilts!

"Hopefully towards the end of the year we can have a big party to celebrate granny's award, the group's award and our anniversary all together."

Gretta will receive her BEM at Hillsborough Castle when COVID restrictions permit, but for now her eye is on her next alteration.

"I have a couple of kilts ready to alter here now as some of the children have grown out of them.

"It keeps me busy and I will keep doing it for as long as I can," she said.

Gretta would also like to thank people for the many hundreds of messages that have poured in since the news of her BEM became public.

"It's exceptional. Maybe there are people who needed it more than me, but I'm very happy.

"I'm only helping people and I'm very proud to be recognised in this way," Gretta added.