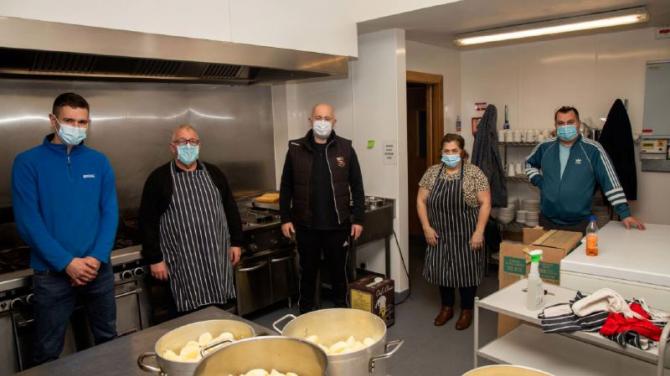 WHILE much of the sporting calendar has been decimated this year due to COVID-19, one local club has proven that sport is much more than what happens on the pitch.

For several months during the first lockdown, volunteers at Bready Cricket Club came together to provide a meals on wheels service to those most in need in the local surroundings, particularly the elderly and those in isolation or shielding.

The venture was only supposed to be a one-off goodwill gesture but due to its resounding success and thanks to the generosity of funders, businesses and local people, the service ran from March through to July, ending when restrictions eased.

Every Sunday, around 130 piping hot meals and tasty desserts were delivered to the doors of residents in Bready, Magheramason, Cullion and surrounding areas.

Incredibly as the volunteers - who became known as the 'Cricketing Cooks' - wound down the service it was revealed that they had provided in excess of 2,000 meals.

Following a well-deserved breather and with new COVID-19 restrictions announced in November, the team quickly dusted off their pinnies and reassembled to ensure that once again, the vulnerable would be looked after during the ongoing pandemic.

Hundreds of meals were delivered across the community each Sunday from November 29 until December 13, all of which were greatly received.

The meals typically consisted of meat, vegetables, creamed potatoes and a dessert provided by members of the community, to polish things off.

"The feedback and compliments from every one who received meals has been amazing and is really appreciated by our team," a club spokesperson said..

"Each week we are blessed to have volunteers who have provided desserts.

"A huge thank-you to those who have helped us throughout the year, be it funding via RAPID, Community Foundation NI, SSE, ESB, Tesco’s and support from local businesses such as Nisa Store Magheramason, FAST Technologies, Fleming Agri, Magheramason Community Association and the Bready Loyal Orders and numerous members of the club and local community.

"A brilliant community effort by everyone."

Pying tribute to the team of volunteers involved in the initiative, the spokesperson added: "To our team of Cricketing Cooks and volunteer drivers who unselfishly gave up their time to provide meals for what was to be for one week but ended up 21 weeks; your commitment to the local and wider community did not go unnoticed and showed what community spirit can be created from within a club environment."

With Northern Ireland now in the grip of a six-week lockdown, the Cricketing Cooks are back and ready to respond again!

It's been confirmed that the team will be back in the kitchen serving up some hot meals to go this weekend.

"When the Cricketing Cooks last had their aprons on on December 13, we'd hoped January would see us back to some kind of normality.

"Unfortunately, COVID and the government think otherwise. So, next Sunday, January 3, the Cricketing Cooks are back....Since it's January, are we all on salads?" a post on the club's social media page read.