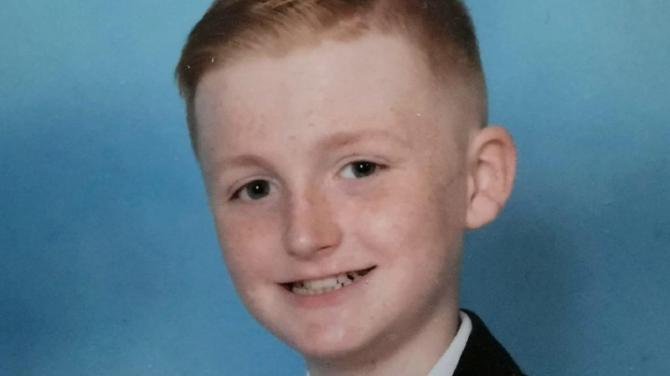 A KIND-hearted schoolboy is planning a charity headshave in a bid to raise funds for the 'Amy's Christmas Wish' campaign.

Eleven-year-old Ashley Gray Glenn is hoping to raise as much money as he can to go towards the fund for his school friend, Amy Simpson, following her recent diagnosis of scoliosis.

Scoliosis is a condition where the spine develops abnormally and curves excessively in one direction.

It can affect people of any age, from babies to adults, but most often starts in children aged 10 to 15 and if left untreated, can cause damage to organs by putting pressure on them.

To this end, a major fundraising appeal has been launched under the banner of 'Amy's Christmas Wish' to help raise the funds.

And, young Ashley who had been a classmate of Amy's during their seven years at St Mary's Primary School, Strabane, is keen to do his bit.

Mum Zarra Gray Glenn explained: "When he heard about Amy, he really just wanted to do something to help and try to raise money for her.

"He's really good at art and at first he was going to draw portraits of his classmates and sell them on for £1 or so.

"But he then came up with the idea of shaving off his hair.

"Anyone who knows Ashley will know he is mad about his hair - we can't get a shaver near his head.

"At his age his hair is his identity. He never wants it cut so it's a real big deal for him.

"His thinking is; 'my hair can grow back but Amy's back can't get fixed without the surgery'."

Zarra is understandably proud of her young son.

"Amy and Ashley would have been in the same class for seven years but they're both now in first year at Holy Cross College and in different classes.

"He just couldn't believe it when he saw the video about her diagnosis on Facebook and the first thing he said was 'what can I do to help?'

"He knows that Amy needs the money urgently and he just wants to do whatever he can to help her reach the fundraising target.

"He is a very caring and thoughtful wee boy. We're all very proud of him."

The proud mum said that she has been overwhelmed by the response to Ashley's charitable efforts since she posted about it on social media.

"There's been so many nice comments and he will delighted with the messages," she added.

A date for December 22 has been set for the head shave with Ashley's uncle, Lee, who hairs a hair salon in Strabane performing the all important task.

"We hope to livestream it on Facebook and have a final total to hand over to Amy's family then in time for Christmas," Zarra continued.

"I have a PayPal link set up for donations. I know that times are tough for everyone but every penny counts, no matter how small or big, and we are very grateful to everyone who donates."

To donate, you can find the link on Zarra's Facebook page or go on to the PayPal link:

At the weekend, Amy's family revealed that they have reached the halfway point in their fundraising with £20,000 raised to date.

They have expressed their gratitude to everyone who has contributed to the fundraising in any way.

To support Amy's Christmas Wish, you can also log on to www.gofundme.com/f/amy-christmas-wish