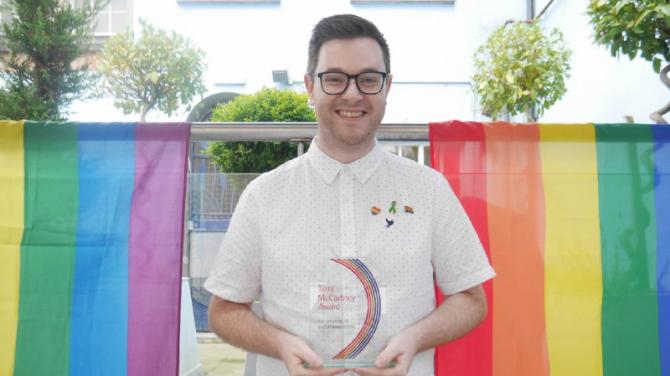 STRABANE man, James McGoldrick, was one of the people honoured by Foyle Pride for their role in the LGBTQ community in Derry City and Strabane.

The awards were presented by Mayor of Derry City and Strabane District Council, councillor Brian Tierney, at a small, socially distanced Pride launch in the Garden Of Reflection at the Hollywell Trust in the city on Saturday.

This was the only event people could attend this year as the rest of Pride is online.

James was given the Terry Mc Cartney Award for Social Awareness for his work in raising awareness of LGBTQ issues at his work at Allstate, Strabane and in the local community.

James is the LGBTQ representative at Allstate and has worked tirelessly to ensure the Embrace initiative is effective in the company.

In 2016 Allstate NI employees launched Embrace an employee led initiative to promote an inclusive work environment for Allstate employees who are gay, lesbian, bisexual, transgendered, queer, questioning, intersex, or asexual or those who support this community.

Like other employee networking groups, Embrace strives to help its members reach their full potential without fear of discrimination.

It has an agenda to seek out opportunities to add value to the business by sponsoring education sessions and collaborating with other employee network groups. Embrace is also a member of the Diversity Champions programme hosted by the Rainbow Project team in Belfast.

James is a volunteer with the Rainbow Project’s small but active ‘Queers Outside The City’ group in Strabane.

He is very knowledgeable about the culture and history of LGBTQ community and has lead workshops within the group.

One of his workshops on flags was so popular that he was asked to deliver it to the LGBTQ youth group in Strabane, Out North West and to a group in Letterkenny.

After the award James said: “One of my proudest moments. Receiving the Terry McCartney award for social awareness, honestly still stunned about it and I can't thank Stephen Birkett enough for nominating me for it.

"I've just been so humbled and honoured to receive both the nomination and award and even more so for the person it's named after and the impact and legacy he has had."

A spokesperson for Foyle Pride said: “The outstanding contribution made by these people to our community and wider society is unmeasurable and priceless.

"We are truly thankful for their actions and commitment to making the lives of others better.

"We want to thank our Mayor, cllr Brian Tierney for his support with Foyle Pride Festival 2020 and for presenting this year’s awards.

"Also, to Helen Quigley from the Inner City Trust who provided us with the beautiful venue for Saturday’s presentation and Alpha stained glass for making the beautiful awards.

"We want to say a special thank you to everyone who sent us in a nomination and although we only have five categories and can only have five winners, every person that was nominated is a winner in our eyes. We now look forward to next year’s awards.”

Still to come is the live webcast of ‘Proud to Be’ from the Playhouse at 8pm on Friday featuring seven powerful ‘Talking Head’ style monologues about LGBTQ experiences written by Mel Bradley based on interviews online with local LGBTQ.

On Saturday a massive flag will be draped over the city wall, the Derry City and Strabane District Council office in the city will be illuminated in rainbow colours and there will be a virtual pride parade online consisting of video contributions.

If anyone is interested in joining or contacting either of the Strabane LGBTQ groups here are the contact details:

Out North-West is a support group run jointly by Cara-Friend and The Rainbow Project for LGBTQ between 12 and 18. Contact Amy on amy@outnorthwest.org.

Queers Outside The City is a support group for LGBTQ over 18 and it is run by The Rainbow Project. Contact Mardi on mardi@rainbow-project.org.

NICHOLA DALY: Knock-on impact of COVID will be felt on businesses for a long time