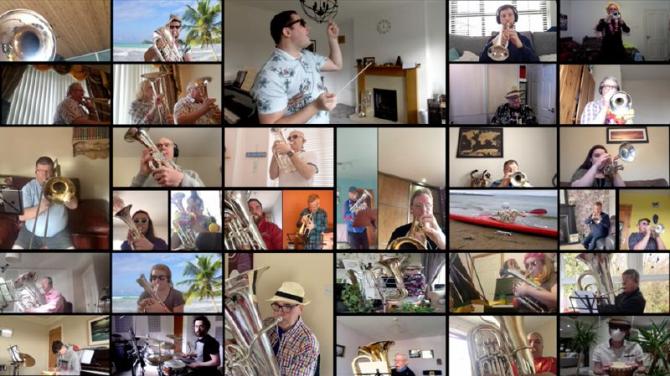 A LOCAL brass band has gone viral after coming up with a creative alternative to their weekly rehearsal sessions.

Strabane Brass Band's uplifting performance of the classic 'Hawaii Five-O' theme tune has become a huge online success with thousands of views across the world.

At a time when the COVID-19 is creating huge anxiety, the band's performance has brought some much-needed light relief - and many new fans!

Members had become a little bored with no weekly rehearsals and got creative with the social distancing performance, percussionist Michael Kielty explained.

Michael explained: "One of the top bands in the UK, The Cory Band from Wales, posted a similar video a few weeks ago.

"We had been trying to come up with ways to keep the band playing so thought we would give it a go. Basically we just wanted to go for something up beat and fun

"It was quite time consuming but its been worth it to get all the guys in the band playing together and seeing the reaction on Facebook has been great."

With membership mainly drawn from Strabane but with members from Derry, Fermanagh and Donegal as well, the performance has been viewed over 24,000 times.

Michael said he has been amazed at the level of response the video has generated.

He continued: "We never expected it to go as far as it has.

“We thought maybe it would be shared around are friends and families but we've now had comments and shares from as far away as Australia and America."

The band are already working on their next performance which again, will be released on it's Facebook page so make sure you stay tuned!

"We have a few ideas in the works. A few of our members partners are working on the frontline with the NHS so our next video is going to be a tribute to all the key workers.

"We're also working on an idea with Bready Ulster Scots and the Londonderry Bands Forum thanks to funding from Derry City and Strabane District Council.

"Keep an eye out. We will have our next video out in a couple of weeks time," he added.