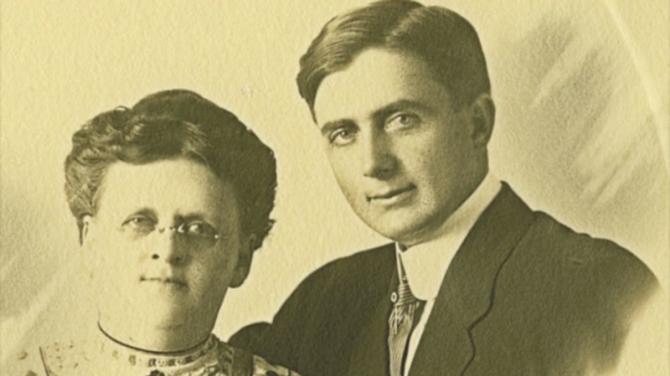 LITTLE do we realise that when we sing along to the famous song ‘Hotel California’, we are actually singing about a hotel with strong links to the Strabane area and particularly Urney.

Hotel California’s lyrics were composed by Don Henley and Glenn Frey of the 1970’s American rock band The Eagles.

The song was inspired by the Urney-linked Beverly Hills Hotel which is set deep in Beverly Hills and features on the album cover.

It is one of the best-known hotels in the world and famed for Hollywood film stars, rock stars and other celebrities.

It was the first hotel in Beverly Hills and built at a time when ‘The Hills’ were nothing more than slopes colourfully decorated with orange and lemon trees.

The Strabane links to the hotel come through Margaret Jane Anderson, a Presbyterian preacher’s daughter who became a wealthy hotelier, businesswoman and socialite, and her son Stanley, who Margaret hired to assist her in managing the Hollywood Hotel, co-owned by Almire Hershey.

Margaret herself was the widow of wealthy businessman Louis C Anderson, originally from Kentucky. He was 20 years her senior and died when she was 44.

Margaret had difficulties working with Hershey who sued Anderson for non-payment of rents due leading to Anderson counter-suing Hershey.

Things were not going well for either of them, despite the fact that Anderson had expanded The Hollywood Hotel from 16 rooms to 250 rooms.

During that time Margaret was approached by an oil tycoon named Burton Green. Green had already started to develop the Hollywood Hills area by building a few luxury mansions but he was having trouble selling them.

Inspired, he decided the area needed a new hotel and hired Margaret and Stanley to oversee its development and management.

Green wished for the hotel to be named Beverly Farms after his home in Massachusetts. So, in 1911, plans were announced to construct a new luxury hotel on 9641 Sunset Boulevard at the cost of $500,000.

The Beverly Hills Hotel opened to huge success on April 20, 1912 and had regular guests such as Douglas Fairbanks and Mary Pickford (the celebrity couple of the era), Charlie Chaplin, Buster Keaton, and Rudolf Valentino.

In 1928, Margaret Anderson sold the hotel and retired and passed away after a short illness on September 24, 1930 at her home in Los Angeles.

Her obituary from The Beverly Hills Citizen newspaper read: “Mrs Anderson was one of the outstanding pioneers in the development of Southern California. Possessed of an abiding faith in the future of Los Angeles, particularly that section which stretches westward to the hills, she contributed materially to the growth and development of Hollywood and Beverly Hills, in the two large hotel enterprises which she owned and developed – the Hollywood and the Beverly Hills Hotel.”

But, what about the connection to Urney? Margaret Jane Anderson was born in 1859 in Iowa, USA. She was one of five children and the second daughter of Robert Boag (Boak) – born in 1827 in the townland of Peacock Bank, Urney, County Tyrone – and Christina Johnson from Scotland.

Robert's father, Aaron Boak, was a farmer in Urney, but being one of five sons, Robert decided to seek a different vocation.

As a young man, Robert Boak left Urney for Glasgow to study theology. Presumably this is when and where he met his wife.

After he completed his studies in 1852, they decided to move to the United States. On arrival, he moved from place to place as a Presbyterian minister. Somehow, during this time, his surname had changed from Boak to Boag.

No record has been found of Robert and Christina's marriage, but in 1856 they had their first child, Anna, born while the couple were living in Canada.

Soon thereafter, they moved to Iowa where four more children were born: Margaret (who became central to Hollywood’s development), Thomas, Charles and Frank.

On December 9, 1872, Christina died at the young age of 38, leaving Robert as sole provider to five young children.

He remarried to Mary O Anderson on May 4, 1874 but little is known about her except that she came from Pennsylvania.

The family later moved to California and are recorded as residents of Los Angeles in 1880, where they would live out the rest of their days, except for Thomas, who moved back to Iowa after he married.

Robert Boag passed away on July 8, 1912 at the age of 84, shortly after The Beverly Hills Hotel opened.

During his lifetime he witnessed life in Urney and became a Presbyterian preacher before moving to Los Angeles.

There he saw his daughter open a hotel that has since become synonymous with the glamour and decadence of California.

The Boak family no longer live at their homeplace in Peacock Bank in Urney. Instead, they are scattered all over the world.

Robert Boag's grandfather, also named Robert, married a local girl from the nearby McCormick family and their descendants can be found in England, Canada, the United States and across the globe.