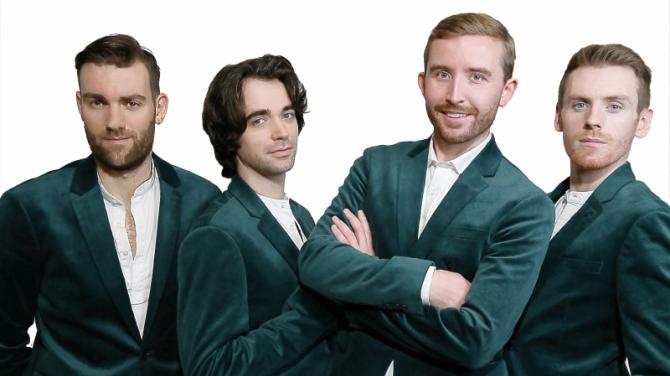 STRABANE man, Ryan Lynch, is looking forward to a ‘homecoming’ concert of sorts when his new male vocal harmony group performs at The Playhouse later this year.

Ryan and his band, The Four Harps, will be performing for the first time on Northern Irish soil when they take to the stage of the Londonderry venue on Saturday, March 14.

The 30-year-old, who is originally from Strabane but now living in England, has been working on the group for a few years and says their upcoming performance is very much a ‘homecoming’.

A past pupil of St Colman's High School and then Holy Cross College, Ryan went on to train at Northumbria University and Associated Studios London.

No stranger to performing, he has lived in England for the last 10 years working in musical theatre and has appeared in several productions including new musicals such as ‘The Clockmaker’s Daughter’.

Most recently he toured the world with a major cruise line playing leading roles in popular musicals including Tony in ‘West Side Story’.

Fiercely proud of his roots, he has always loved Irish music and in 2017 developed a solo show singing some of his favourite songs.

It was while travelling on the cruise ships that he started to do a few cabaret shows alongside the main musical theatre performances and one night he decided to do an Irish show.

Although there were very few Irish people on the ship everyone seemed to have a connection with the Irish music that he was performing.

Upon leaving the ships he decided he wanted to work on something bigger which is when he chose to form the four piece vocal group which would feature intricate and difficult harmonies.

Setting out on finding other members, he held auditions and now the group consists of 27-year-old Conor O'Kane from Derry, 24 year-old Kevin Fagan from Dublin and 27 year-old Fergal O'Hanlan from Galway, alongside himself.

The boys have already performed at the Kinky Kaberet, The Phoenix Arts Club, Archer Street, Soho, The Concorde Club, Southhampton, The Above the Stag Theatre and Picadilly’s, Crazy Coqs, Live At Zedel.

The group has also enlisted the help of Toby Nelms with their musical arrangements and Ian Good for creative staging.

Ryan is confident The Four Harps and their programme of music which includes ‘The Irish Rover’, ‘Danny Boy’, ‘You Raise Me Up’ and ‘With or Without You’, will have a wide appeal.

It is their aim, he says, to introduce the beauty of Celtic music and voices to the world and these Celtic charmers intend to tour their shows internationally.

Their upcoming show in the city promises to be a wonderful experience with a wide appeal featuring fantastic vocal harmonies and Irish traditional music mixed with modern.

Ryan describes it as having “the old and the new” with surprising song mash-ups and arrangements, like a “little Easter egg”.

“We'd take a modern song, something like Sam Smith, Ed Sheeran, James Bay or even something from The Greatest Showman and give it an Irish traditional music makeover.

“You will listen to it and you don't expect the mash-up to come in so it's quite a nice little treat when it happens,” he said.

The hope for the group is to expand on the work that they have started to do in England and spread it even further and take their show all around Ireland.

As a Strabane native Ryan said that they will be “definitely going to bring it to Strabane at some point, for sure”.

The performance will start at 8pm and tickets are £12.50/£14. Visit www.derryplayhouse.co.uk for tickets.

More information on The Four Harps and any upcoming events can be found at at www.thefourharps.com

Or, follow any of their social media platforms under the name @thefourharps.