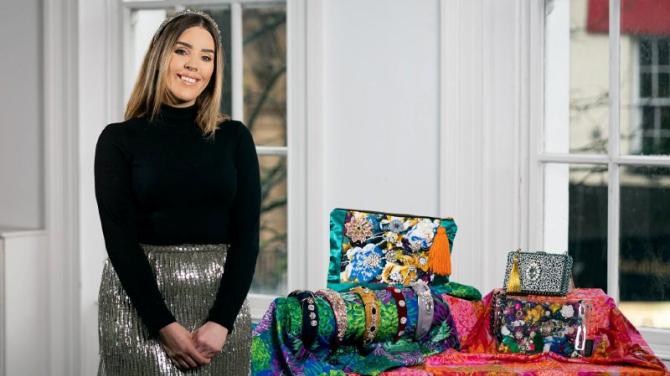 A YOUNG Strabane designer is showcasing her work in the prestigious Showcase Ireland event this week.

Cara Sweeney is one of eight local designers chosen to take part in the exhibition which is being held in RDS, Dublin.

The exhibition is running from Sunday until Wednesday and features the best of independent fashion, jewellery, home and giftware industries.

Cara makes headbands, accessories and bags under her brand ‘Grace Loves Embellishments’ and is looking forward to not only showing her creativity at the event, but also telling her inspiring story and her path to get there.

“I was hospitalised with bad mental health issues in December 2018, and when I was leaving the consultant told me that I should find something to do and to focus on.

“So I made two headbands and didn't think much of it but my mum put them up on Facebook for sale and they were both away within 20 minutes.” she explains.

“I went and made a few more and from there it just grew and grew – within the first six months I had products in 11 different stores.”

She is a member of the Fashion & Textile Design Centre, run by the Inner City Trust in partnership with Derry City and Strabane District Council.

After taking a few months away from creating she was then contacted by Deirdre Williams at the Centre about in the pitching process for the Showcase Ireland event.

Cara says that she has taken part in two other events and she ended up speaking about her journey.

She continued: “I just thought why not, it’s a new year and I’ll go for it. I’ve been quite lucky in the sense that I have been involved in two others events and actually ended up speaking about my journey as well.

“I’m using my brand to build a platform that shows you can go out there and do what you want to do and be successful in it, even if you are battling with your mental health.

“Getting to take part in the event in Dublin is obviously amazing for my confidence and in helping me boost the brand. I actually went to the event before with my mum, but I never thought I would have the chance to take part myself!

“Even the opportunity to go down south and raise awareness of issues in Derry and Strabane, and in Northern Ireland as a whole, is massive. It gets people talking, and that is a big aim for me.”

At the centre of everything that she does is mental health promotion and education and that includes her business.

For each sale that Cara makes a donation is made to Inspire Wellbeing NI.

“The reason I started was as a way of managing my mental health, and it’s a huge part of what I’m doing. I want to employ others who have gone through similar experiences to mine in the hope it can help them also,” she said.

“For me, it’s not about the money - I want to make an impact in the community. Even in just one year, the whole experience so far has made such a difference to me in terms of my confidence, socialising and connecting with other people in the industry. I’m hoping that I can expand and bring other people in that will enjoy that same experience.”

“Some people might not have the money for a whole new outfit so I thought my headbands and bags and accessories would be a cheaper option that would still make you feel nice.

“Sometimes if you’re having a bad day and someone passes comment about how much they love what you’re wearing it can really change your day completely,” she said.

“I felt in the past I was hiding who I was, so I make all my products really colourful and bright as a form of expression – of showing who I really am.”

Giving praise to the work that the Fashion and Textile Design Centre do and, in particular, Fashion Hub manager Deirdre Williams, she  describes the encouragement that she received there as '”invaluable”.

“I had never attempted to break into the industry before so the Fashion Hub has been unbelievable for me,” she admitted.

“It’s not just the guidance and the knowledge, but being surrounded by other amazing creators and having so many people there who can lift your morale if you need it and give you loads of encouragement is invaluable.

“Deirdre especially doesn’t get anywhere near the credit that she deserves. Without her I wouldn’t be where I am now. She always focuses on what I’m good at and encourages me every time that I need her, so I can’t thank her enough for everything that she’s done.”

More information can be found at www.gracelovesembellishments.com