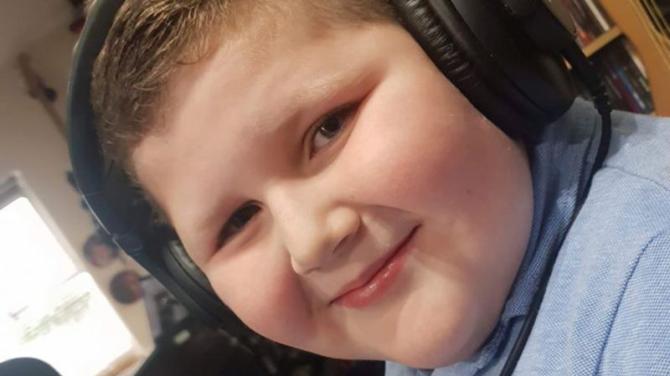 A talented Strabane six-year-old is set to make his dream of launching his very own CD a reality.

And as well as having a great voice, young Kaiden Page, who is a pupil at St Mary's Primary School, has a big heart – proceeds from the CD will be donated to the Foyle hospice and Paul's Ward at the Royal Victoria Hospital, where one of his close friends is currently receiving treatment.

The event is set to take place at Strabane Golf Club on Saturday, February 22 at 8pm, and promises to be an unforgettable night of music. Kaiden’s CD will feature two of his favourite songs, ‘Were All Going To Die Someday’ and ‘Long Haired Lover From Liverpool’.

According to Kaiden’s mum, Claire, her son has always had an interest in music, and has been putting his gifts to use by singing at various venues around the locality.

“Kaiden was born music mad!” she said. “He is very into country and drama, and from a very young age he was invited down to a pub in Letterkenny to sing. He used to tell everyone that his dream was to make a CD, and that dream is to become a reality!

“He has a wee friend from the town, also six-years-old, who has a brain tumour. He attends Paul’s Ward at the Royal Victoria Children’s Hospital and has undergone three operations in the past nine months.

“Kaiden is part of Encore Theatre Group in Strabane – the manager approached him to see if she could take Kaiden on board for her classes. She said she would be willing to record the CD in a studio for him, and we done that before Chirstmas.”

“He sang at the recent Strictly Come Dancing event and he impressed the crowds. After that we decided to hold a launch night for his CD, and its set to be a great event. It will feature  a lot of prizes, ‘Jiving Jim’ from Co Armagh, and video messages from some of his favourite singers Nathan Carter and Gary Gamble.

“We are inviting everyone to come and support the event and see Kaiden perform – he has the gift of being able to keep the crowd going, and he is a born entertainer!

“We would like to thank Encore Performing Arts teacher Rebecca Thomson and David Doonan.”

Speaking to the Strabane Weekly News, Kaiden said he is “very excited” about his CD launch.

“I am very excited. I have been singing for around two years. My favourite singers are Nathan Carter, Gary Gamble and Cliona Hagan, and my favourite song is “Were All Going To Die Someday’, which is on my CD.”