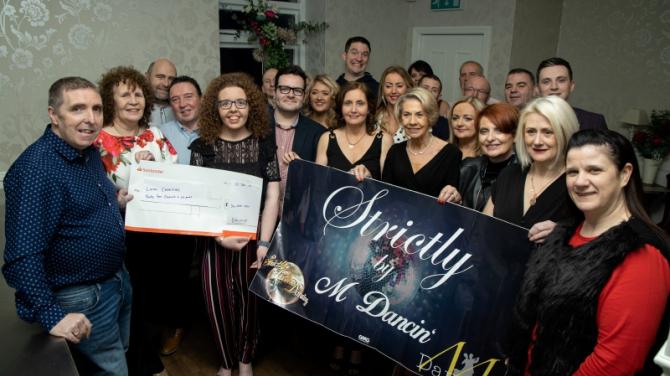 THE annual ‘Strictly Come Dancing’ show has smashed its fundraising target yet again, organisers have revealed.

Announced on Friday night at a special presentation night, it’s been confirmed that several charities will benefit to the tune of a staggering £34,066 – surpassing the amount raised at last year’s event.

The show has been delighting audiences locally since its inception with hundreds of brave individuals putting their best foot forward and all in the name of charity.

This year, 23 couples who were trained over three months, took to the dancefloor across seven themed rounds as the show made a triumphant return for its 12th consecutive show over two nights at the beginning of December.

Run by the 'Strictly M Dancin' team and ‘Spirit of NI’ award winners, husband and wife, Paul and Rosemarie Mullen alongside their daughter, Sarah Jane, the annual showstopper was held once again at its ‘home’ in St Patrick's Hall here in Strabane.

Since its beginnings 'Strabane Strictly' - as it has come to be known - has become a 'must see' in the local events calendar and the most recent show was no different.

The show sees groups of novice dancers drawn together from different backgrounds and age groups and guided through various dance routines by the team of well-experienced dance tutors before going on to show the fruits of their labour in the grand finale weekend.

This year proceeds from the glitzy event, which has raised hundreds of thousands since it first started, will go in aid of Marie Curie, Foyle Hospice, the Sperrin Room at Altnagelvin Hospital, Strabane Down Syndrome Support Group, The Koram Centre and the hosts, Strabane Parish.

M Dancin’ wishes to thank everyone who helped make the show another success including the dancers, sponsors, businesses, staff at St Pat’s Hall, guests, performers and all those who attended.

A spokesperson said the team are delighted to see the show continuing to go from strength-to-strength and once again becoming a record-breaking success.

Thanking everyone associated with the show and who those have supported it throughout the years, they said: “We did it again. We are so proud to say that we have not only matched last year’s target but we smashed it.

“Thank-you to all the dancers or all your hard work and to all our sponsors and business sponsors for your continued support.”

The show is now looking forward to returning in 2020 for a remarkable 13th year and recruitment is already under way!

For further details check out the Facebook page - Strictly by M Dancin’.