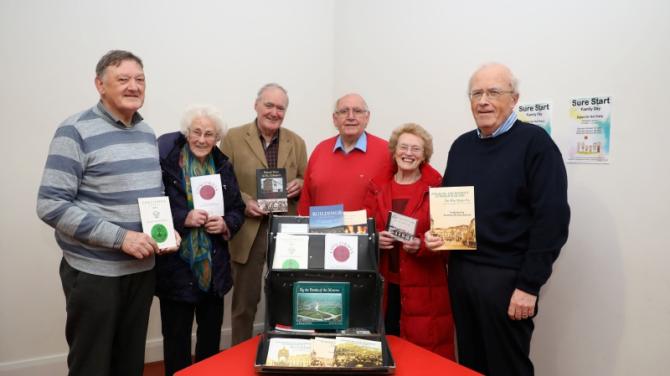 FOLLOWING on from the successful annual meeting and 30th anniversary celebration of Strabane History Society, the group has announced that the December meeting will be held tomorrow (Thursday).

Dr Liam Campbell, working with the Loughs Agency, will give a talk on the Foyle River as a major waterway through the ages and on the Foyle valley in general.

In earlier times the waterway covered much more land than at present and earlier maps show Lough Foyle as stretching as far south as Strabane with much of the present lowlands near the river being under water the whole year round.

This meant that the way of life of many of the earlier inhabitants was much different from it is today with major effects on travel, crops and livelihoods.

Liam has been a regular contributor to Strabane history meetings and we look forward to his new perspectives on the role of the Foyle in shaping lives for earlier generations.

The starting time for the meeting is 7pm at Strabane Library and there may be some seasonal refreshments on the evening.

The History Society also celebrated its 30th anniversary and a large attendance were taken through its 30 year lifespan by Michael Kennedy in a riveting presentation of photographs, posters and statistical information on the wide range of topics and issues discussed over the three decades at the society meetings.

Some of the earlier stalwarts were no longer able to be present but it was clear that memories of them lived on in the recollections of the members present.

The successes of the society in producing a wide range of books and pamphlets on the history of the area were highlighted and it was hoped that these early successes could be built upon in the years ahead.

That was the task set for the new committee, elected at the annual meeting just before the presentation.

Reports from outgoing secretary Michael Kennedy and treasurer Pat McGuigan pictured a healthy position for the society and the elections for new officers showed only minor changes in personnel.

Michael Kennedy was appointed chairman on the withdrawal of Johnny Dooher from the position and he was selected to take over from Michael Kennedy as secretary.

Paul McElwee was elected as vice chairman while Pat McGuigan was returned as treasurer and with Joseph O’Kane as assistant treasurer and registrar.

Tributes were paid to the long term involvement of Pat Gillespie as president of the society and the question was who would replace him.

After some persuasion long time society member and community activist, Mrs Bridie McGillion, agreed to take over the position of president, with the hope that she could strive to emulate the long service of the late Mr Gillespie.

Two committee positions are still up for nomination at the next meeting and it is hoped that the influx of all these new officers will help the society to plan its future development in the years ahead.

So, this week the topic is the story of the Foyle waterway with Dr Liam Campbell and the January talk will examine local councils in Strabane and district 100 years ago.