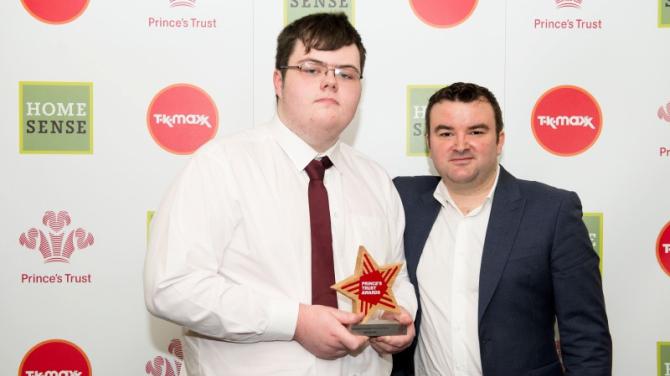 A STRABANE teenager is among a group of inspirational young people who has been was honoured with an award at The Prince's Trust Awards.

The Prince's Trust and TK Maxx & Homesense Awards honour the achievements of young people who have succeeded against the odds, improved their chances in life, had a positive impact on their local community, as well as people who have played a part in supporting the work of The Trust.

Jed struggled to cope in mainstream school. He became agitated and frustrated and couldn't stay in class for a full day.

His mum received phone calls from school most days, and at home Jed became very withdrawn and depressed.

He was diagnosed with ADHD and autism and was on medication to treat his behaviour. His attendance at school was 33 per cent, eventually he stopped going and home life reached an all-time low.

Jed was offered a place in an EOTAS (Education Other Than At School) service in Strabane. It was there he started on The Prince's Trust Achieve programme and gradually started to build relationships with staff and other students.

Achieve helps young people build the confidence and skills they need to re-engage with education by providing a practical approach to learning.

Speaking about his experience, Jed said: “I had been scared to start another school because I thought the other pupils would laugh at me or call me names because that is what always happened before. Achieve helped me realise that there are different ways to learn and that we all communicate differently.

“I began to let my guard down and make friends, the other pupils there actually seemed to like my quirky personality!

“I became more confident and as part of a fundraising project I even offered to dress up as Santa to draw the raffle - that's not something I ever thought I would do.”

He continued:  “I have started walking to school and eating more healthily thanks to what I have learnt through Achieve. I'm feeling so much better and I don't need to take medication anymore.

“I have friends now and I'm looking forward to starting a media with art and design course in college starting this autumn.”

On winning the award Jed added: “Being part of the Achieve programme was good, it was easier and less stressful than other courses I have done. I'm surprised I won this award, but pleased nonetheless."

Jed’s youth worker, Agnes Millar, nominated him for the Ascential Educational Achiever award and was thrilled to hear he won.

“Jed has been on a rollercoaster journey facing his fears and stepping out of his comfort zone in a safe and nurturing environment,” she said. “He surpassed all our hopes regarding social and emotional interaction and development on the programme.

“His mum says he no longer hides in his bedroom and regularly gets involved in large family occasions, often initiating events himself which would never have happen before. We're all so proud of Jed and wish him every success.”

Also congratulating the teen on his achievements, Michael Clark, VP at Ascential said: “Well done to Jed on winning the Educational Achiever Award.

“He is a complete inspiration and I'm sure we can expect big things from him in the future."