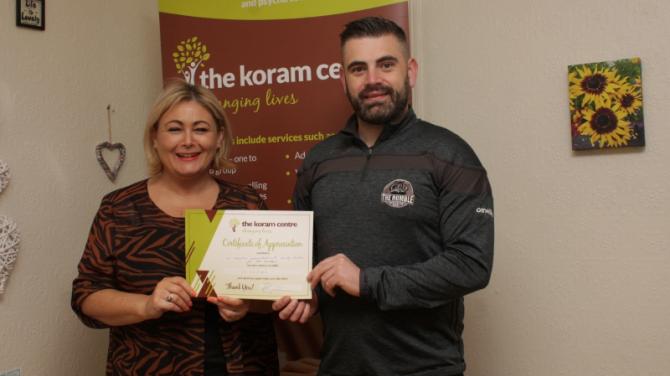 THE proceeds of this year’s biggest fundraising initiative in Strabane have been donated to the beneficiaries.

The popular ‘The Rumble: Battle of the Minds’ charity boxing fundraiser was staged in the Fir Trees Hotel back in March and raised a staggering £21,337 – trumping last year’s £18,450 which was donated to Macmillan Cancer Support.

This year’s event was held to raise awareness of mental health issues in Strabane and much-need funds for two local causes; The Koram Centre and Knockavoe School and Resource Centre.

The white collar boxing extravaganza was a huge success and organisers; James McMenamin, Patrick McCloskey and Conor McGrath, have now presented their two chosen causes with their donations.

In announcing the grand total, they said: “We have raised a massive £21,337 and we have exceeded our goal once again.

“We can’t thank everyone who came out and bought a ticket for the event. Your support was absolutely amazing. Our primary goal was always to raise as much money as possible. Every single pound of profit went to our charities.

“Once again, thank you to our sponsors Masala and O'Neills Sportswear, the Fir Trees Hotel and their staff, everyone who donated to the raffle and bought tickets, the corner men, referees and judges and of course every single brave fighter that stepped through the ropes on the night. “

You are what made the night possible. This town always turns up when it's time to support their own.”

They added: “We know all too well that mental health has become a prominent issue in our town.

“We wanted to do something about that and just hope now that the people in power take notice of what proper funding can do and continue to help and support our local charities. It could be a mother, a father, a son or a daughter. It can happen to anyone and we hope these funds help to keep providing those vital services.

“Once again from Patrick, James and Connor thank you to each and every single one of you.”

The trio have confirmed that this was the second and final chapter of ‘The Rumble’ but are already planning future fundraising activities over the summer.