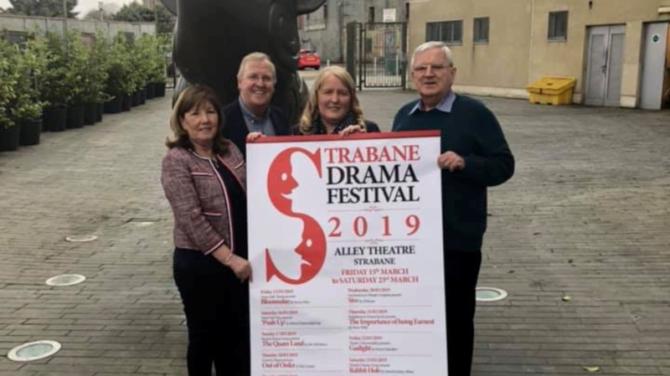 STRABANE Drama Festival has entered is 33rd year with an astonishing line-up of top tier actors from around Ireland and Northern Ireland.

The Alley Theatre will host this cultural event, which takes place from Friday to Saturday, March 23. It will include some brand new plays and of course the classics.

Opening this year is the Gorey Little Theatre with ‘Bloomsday’ by Steven Dietz, a literary and time-travel tale wrapped with ribbon around a wistful love story.

Gorey Little Theatre are looking forward to participating this year for the first time. “We are really looking forward to bringing Bloomsday to Strabane. For many of us it's our first visit to the beautiful Alley Theatre. Bloomsday is a new play and we hope Strabane’s audience will enjoy our production,” a spokesperson said.

On March 16 the fun continues with the Moat Club Naas’ performance of ‘Push Up’ by Roland Schimmelpfennig, a savage satire on the voracious nature of office lives and lust. On March 17, it’s the turn of Knocks Drama Group with ‘The Quare Land’ by John MacManus.

March 18 kicks off with the Olivier Award-winning comedy, ‘Out of Order’ by Ray Cooney, which begins when a government junior minister plans to spend the evening with Jane Worthington an opposition’s typists and things go disastrously wrong.

Performed by the Pomeroy Players, a spokesperson said: “We have been attending the Strabane Drama festival for the past number of years the hospitality is second to none. We are looking forward to attending the festival.”

Butt Drama Circle will perform the slightly political ‘Someone Who’ll Watch Over Me’ by Frank McGuinness on March 19. This play is about an Englishman, an Irishman and an American locked together in a cell in the Middle East, victims of political action and their struggle to survive.

The Ballyshannon Drama Society have taken on the trivial, farcical comedy ‘The Importance of Being Earnest’ on March 21.

Towards the end of the festival, Theatre 3 Newtownabbey will be performing the classically thrilling play ‘Gaslight’ by Patrick Hamilton on March 22, in which Jack Manningham slowly, deliberately drives his wife, Bella, insane. He almost succeeds when a former detective, Rough arrives to help, believing Manningham to be a thief and murderer.

On the final night, Pulitzer Prize winner ‘Rabbit Hole’ by David Lindsay-Abaire will be performed by the Wexford Drama Group. It deals with the ways family members survive a major loss and includes comedy as well as tragedy.

Speaking ahead of opening night, Ciara McCay, Strabane Drama Festival director said the week-long festival will include “something for every taste”.

For further information contact the Alley Theatre Box office on 028 71384444 or on online at www.alley-theatre.com.