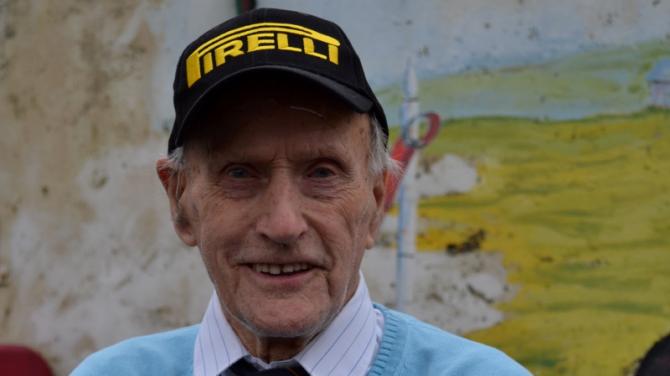 ONE of Strabane's most famous sons is celebrating another milestone birthday this weekend.

December 2 will mark 102 years to the date when the living legend that is Pat Gillespie was born on Newtown Street to parents, John and Bridget.

Down through the years, Mr Gillespie – one of the town’s best known and much-loved characters – has worn many hats.

For 25 years he worked at Buchanan’s Garage on the Railway Road before moving to the Independent Broadcasting Authority where he spent 15 years working.

He has also been a champion boating racer and carries the honour of being the Grand Marshall of the annual St Patrick's Day parade in the town.

A remarkably creative man, he has a famous car and bicycle collection and a museum at his home full of many artefacts and his own bizarre inventions.

A great ambassador for the town, just over a year ago he was subjected to a terrifying robbery ordeal by three masked men in his own home at Railway Street.

In the days following the ordeal, although shaken a defiant and determined Mr Gillespie received hundreds of well-wishes and cards from across the world and refused to let the attack affect him.

At 102 years young, the sprightly centenarian is still fit as a fiddle and shows no signs of slowing down.

He was for many years famous for the New York Police Department car he drove in his hometown however he is now known for riding around on his engine-powered bicycle and regularly visits the grave of his late wife, Eileen, on his bike.

He has been the star guest-of-honour of many of the town’s big events and in fact, his hugely popular presence was none more evident than Saturday at the Christmas lights switch-on in the town when he was on top form chatting to many of the locals who were all delighted to see him.

Speaking on the occasion of his 100th birthday, Mr Gillespie had said: “I don't feel 100. I feel 38 and a half. I'll not be climbing any mountains but I'm still out on the bike.”

The local man, as ever, will be surrounded by his nearest and dearest for his birthday on Sunday and will celebrate with his eight children, 27 grandchildren and 31 great grandchildren.

Ever busy, in his own words, he feels “like a million dollars” and says “laughter is the best medicine” for a long life.