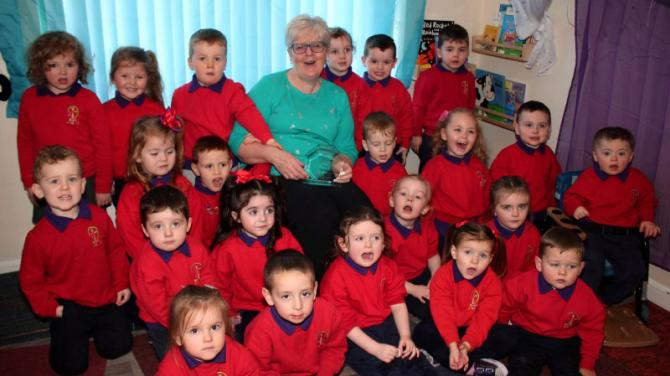 A LOCAL teacher who has been awarded ‘Best Teacher’ at the Families First NI Awards has described the accolade as a “huge privilege”.

Mrs Mary Conlon, a teacher at St Mary’s Primary School Nursery Unit in the Ballycolman, picked up the honour at a glitzy awards ceremony in Sligo at the weekend.

She had been nominated for the award by Marie and Gareth Gibson, the parents of a former pupil, for the educational and pastoral care she had given to their young son.

Speaking yesterday (Tuesday), the delighted teacher said: “It’s a great honour to receive the award and I’m very humbled by it. It was something that was totally unexpected. Last year, a month before Kelvin (Gibson) started nursery, it was discovered that he had a brain tumour.

“When his mummy and daddy came at the beginning of the year they were very anxious about whether or not he would be able to settle into nursery and be able to experience a normal life because he had been on quite severe medication to support his progress after his surgery and still had to go for MRIs throughout the year.

“Thankfully he managed to remain in nursery all year. He attended everyday and his parents were so thankful that he was able to enjoy nursery after having had the diagnosis and that’s why they nominated me for the award.”

The Victoria Bridge native has taught for 34 years – 12 of which were spent in St Eugene’s Primary School, Victoria Bridge, which is also celebrating a hatrick of successes at the awards.

Mrs Conlon said she had been especially moved by the comments of those who had voted for her.

“When it’s down in black and white it’s nice to see what your work has mean’t to parents and children an how you’ve supported them. It’s very heart-warming to be aware of how people feel about you. It’s a real privilege and I’m so proud to have achieved this award.

“All teachers go above and beyond but it just happened to be the circumstances that I was nominated because of the special case of Kelvin and my supporting him through that traumatic experience in his life. A special thanks to his mummy for nominating me and making me feel special.”

Now in her 34th year of teaching, Mrs Conlon has taught at the nursery for almost 20 years and says the award is for all at ‘Team St Mary’s’. Many of her colleagues attended the awards ceremony which was held in Sligo at the weekend.

“It was a great night. Staff from the Nursery Unit and our principal, vice-principal and secretary from the school were all in attendance – ‘Team St Mary’s’ were there to share in the wonderful occasion.

“The staff are all delighted and I’m very grateful for the camaraderie. The staff deserve an award as much as me. We are all a team and this award is for them as well.”