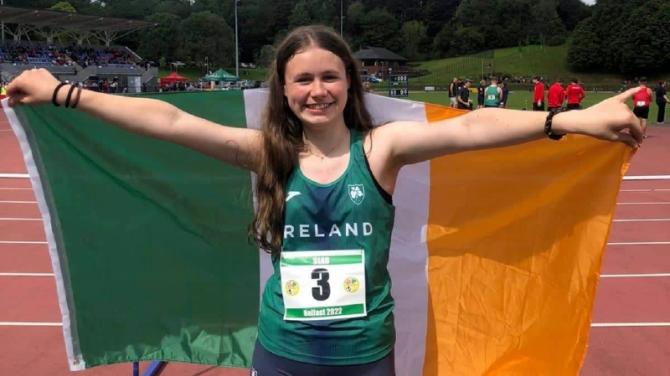 It was Caoimhe Gallen, however, who was the first Irish athlete in action at the iconic Belfast venue, and Gallen led by example by taking victory in the hammer with a new personal best throw of 54.28m.

Gallen’s victory by over four metres was all the more remarkable in that she is underage for this event again in 2023.

Finn O’Neill, back from international duty when representing Ireland in the decathlon at the European Youth Athletics Championships in Israel, was in action in the 100m hurdles.

The Limavady athlete ran a personal best of 13.29 seconds to take third place.

Ellie McCurdy also took a bronze medal in the javelin when throwing 41.26m, her best in quite some time.

McCurdy was also in action on Sunday at the National Junior Track and Field Championships in Tullamore.

The Strabane athlete rounded off a great weekend by taking silver in the women’s javelin with a 35.51m effort, throwing with the senior javelin on this occasion.

Lifford Strabane AC took four silver medals in all from the National Junior Championships with the hammer throw providing two of those courtesy of Cormac O’Donnell in the men's hammer (52.23m) and Adrienne Gallen in the women’s hammer (51.01m).

Gallen also took a silver medal in the women’s shot (9.87m) to round off a good weekend for the Lifford athlete.

This weekend the action turns to Tullamore once again for the AAI Games and the Natonal Combined Events Championships where Lifford Strabane AC have several athletes in action.