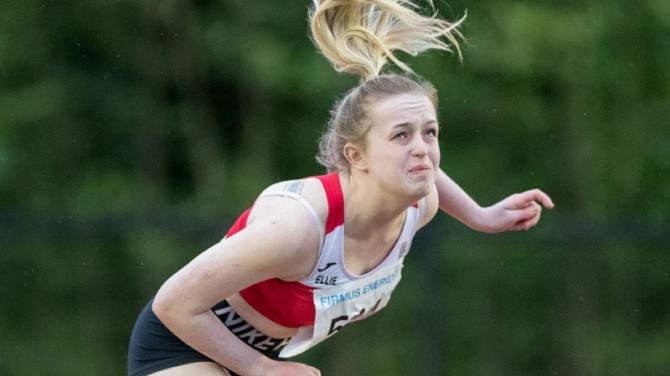 NORTHERN Ireland’s largest athletics competition, firmus energy Fab 5, returned for the second event in the series, attracting athletes from far and wide to the Mary Peters Track in Belfast, all competing for a medal and a place on the podium.

It was a good night for local athlete Ellie McCurdy who claimed gold in the U17/senior women javelin, with an impressive throw of 39.87 metres - ten metres ahead of her nearest competitor, Hannah Lawden, who finished in second place taking home a silver medal, with Sophie Cree finishing in third and claiming bronze.

Strabane Lifford AC also had another medal winner on the night with Elsa Moore putting in a gold medal performance in the senior U17-U20 women 1,500m with a time of 4:54.46. She was joined on the podium by Katie Graham who took home a silver medal and Darcy Monaghan who took bronze.

The series, organised by Lagan Valley Athletics Club, attracted talent from across Northern Ireland and Ireland, and welcomed a participant originally from Spain who is spending a gap year in Dundalk.

Javier Lopez Navarro produced possibly the best performance of the evening in the under 17 boys 200m, narrowly beating the local favourite Michael Boyera with a time of 23.14 seconds.

Aaron O’Neill, marketing officer at firmus energy, attended the event and said: "Following on from the first meet which saw record-breaking numbers take part, the second event welcomed over 280 competitors - an increase from the first event showing the popularity of this competition.

“Not even the rain could dampen spirits with almost 400 spectators out to show their support and cheer on some incredible performances.

“With the series now fully under way we’re looking forward to the next event which takes place on Thursday, August 18, and we’d encourage any athletes interested in attending to register, come along and get involved.”

The highly competitive series, which is sponsored by natural gas company, firmus energy, attracts athletes from across Northern Ireland and Ireland and offers disciplines suitable for all abilities and ages.

Athletes took part in a range of track and field events including short and middle-distance running events, the high-jump, long-jump, and the shot putt.

Lagan Valley Athletics Club president, John Glover, added: "It was another great night for athletics, after the success of the first event, it was great to see almost 300 competitors here at Mary Peters Track setting the bar for the rest of the series.

“The record number of competitors at the past two events demonstrates the popularity of the series, and we’re delighted to see not only local athletes competing, but also athletes travelling from across the island to get time on the track and compete for a medal.”

Online registration for the next event in the firmus energy Fab 5 Series is now open.

For more information and to register for the event, visit www.athleticsni.org/Fixtures/