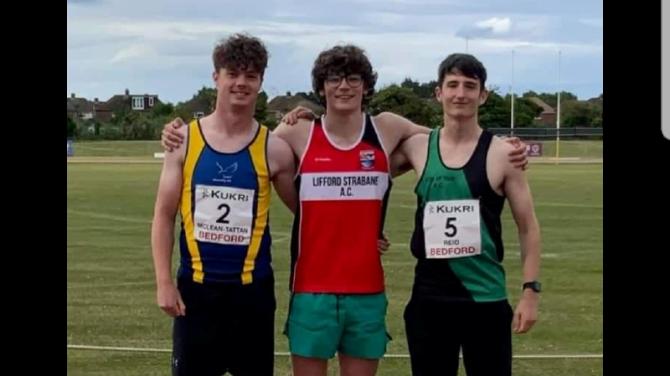 Competing against the best that England had to offer, the young Limavady student did not disappoint and over the gruelling two day competition, O’Neill set five personal bests and three season’s bests to amass a total of 6,838 points for the ten event marathon and in the process smash the Irish U18 Decathlon record and take the English U18 title.

The Lifford Strabane AC athlete is now surely a certainty to make the plane to Jerusalem in July.

Meanwhile, at the Mary Peters Track in Belfast on Saturday, a number of Lifford Strabane AC athletes competed in the Belfast International Meet which coincided with the 50th anniversary of Mary Peters winning Olympic gold in the women’s pentathlon in Munich.

Adrienne Gallen was out of sorts somewhat in the women’s hammer but her throw of 48.16m was still good enough to take third place behind Welsh athlete, Amber Simpson.

In the same event, Cora Burns had a personal best of 36.64m to take fifth spot with clubmate, Una O’Donnell, one place further back in sixth.

Lifford Strabane AC’s Caoimhe Gallen made the long trek to Carlow to the Leinster Championships in pursuit of a qualification standard in the hammer for the upcoming European Youth Olympics.

Gallen will now possibly have one last opportunity to achieve the standard this weekend ahead of the cut-off date for standards on June 6.

Carlin continues to make good progress this year under the tutelage of coach, Michael McKinney.

Endurance runner, Ed McGroarty, has been selected as captain of the Irish team for the upcoming European 24 Hour Championships.

"This is a huge honour for McGroarty, his family and all in Lifford Strabane AC," a club spokesperson said.