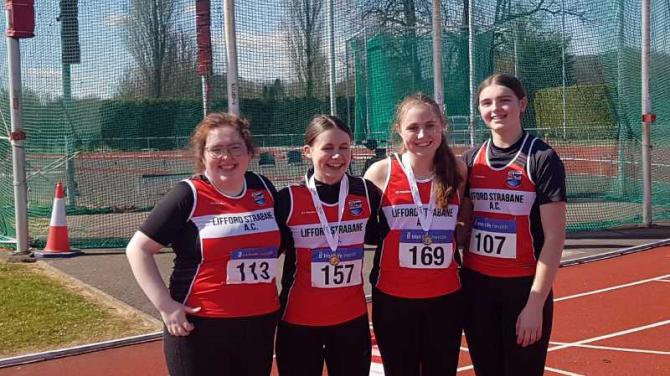 IT was a busy weekend for Lifford Strabane AC athletes with action taking place in Athlone, Templemore and Omagh.

Day three of the National Juvenile Indoor Track and Field Championships took place in Athlone and the venue proved most fruitful for up and coming combined events star, Ashleigh McArdle.

McArdle was in action in the girls U17 shot put and launched the shot to a season’s best 11.96m to take the national title.

Templemore, Co Tipperary, was the venue for the National Spring Throws on Sunday.

Six Lifford Strabane AC hammer throwers made the long trip south and certainly made hay while the sun shone taking four of the six national titles on offer.

There were good performances also from Una O’Donnell, fourth in the Youth Women’s Hammer (36.92m) and Muireann McBride, 5fifh in the same event (36.72m)

Closer to home, all roads led to Omagh on Sunday for the 32nd Omagh Half Marathon and 5K Road Race with great weather for running.

Lifford Strabane AC had one participant in the 5km race - Kevin Gallagher- who returned a finishing in a time of 21 mins 32 seconds.

In the half marathon itself, eleven Lifford Strabane AC athletes toed the line.

First home for the club was Michael Duncan who celebrated his turning of 60 by taking first in the male 60 category with a personal best time of 1:25:29.