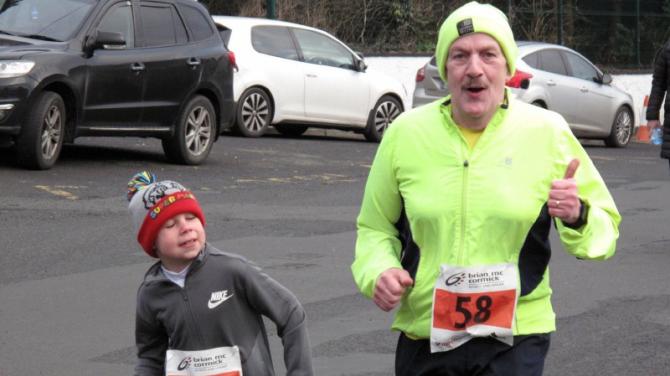 IT was a matter of racing out with the old and running in with the new for members of Lifford Strabane AC.

On New Year’s Eve, the club had athletes competing at the tenth Lough 5Miler, Loughmacrory, which had their largest number of participants taking to the starting line – 743 in total.

Lifford Strabane AC was represented by eight athletes at this road race with some making improvements on their Boxing Day race times.

The first of the Lifford Strabane AC athletes to the finish line was master athlete and national marathon medal recipient Michael Duncan who placed third in the M55+ Category with a personal best (PB) time of 32:33.

On New Year’s Day, Raphoe Road Runners hosted a family 5k run and walk which attracted a strong crowd of almost 300 runners with all proceeds of the race being donated to The KBRT – Kevin Bell Repatriation Trust.

Pius Doherty finshed in a time of 23:12. First male junior athlete to finish for the club was Lifford Strabane AC’s Taylor Neilands in 23:50 followed by Graham Neilands in 24:16, Irene McBride in 28:30 with juvenile athlete Logan Hegarty beating his granda Laurence to the finish line in 36:08. Laurence Doherty finished in 36:15 and Neil Meehan in 37:27.

On Saturday, January 4, in preparation for The Last One Standing Ultra event in February, Lifford Strabane AC’s Don Pearson took to the starting line of the Last One Standing RECCE at Castleward. Don completed the distance of 33.93K in a time of 4:49:26.

Finally, on Sunday 5, Lifford Strabane AC’s juvenile athlete Emily Rose Kelly got her 2020 racing season off to a great start.

This athlete ran a personal best time of eight minutes and 23 seconds and set a new girls course record for her age category at the Derry Junior Park Run. Emily finished first overall beating her previous personal best time on this course by an impressive 27 seconds.

A club spokesperson said: “Well done to all who competed over the course of the week. Congratulations to all athletes that ran personal bests and category prize winners.

“A new season is ahead of us and it’s time to set new goals. Whether it be to run/throw/jump/walk further, faster or more. If you believe it, the mind can achieve it.”

The Couch to 5K Programme commenced on Tuesday. Training will be on both Tuesday and Thursday evenings lasting for five weeks.

Lifford Strabane AC’s 5k Spring Series commences on Sunday, January 12 at 10am in Carrigans, Co. Donegal. Technical top for all whom register for all three races. See you at the start line!

Training resumes for adults on Tuesday 7 and Thursday 9 at 6.45pm. All past, present and future members welcome.

Training for juvenile members past, present and future has resumed on Mondays at 6.30pm sharp.