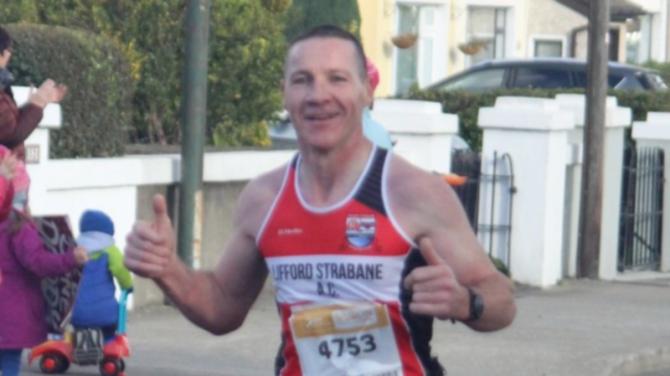 THE Lifford Strabane Athletic Club was well represented at the Dublin City Marathon on Sunday with no fewer than 17 athletes competing the 26.2-mile course on what can only be described as the perfect autumnal morning.

Amongst the 17 athletes there were a few first time marathoners and club athlete Gerard Campbell completed his 42nd marathon to date!

The first of the Lifford Strabane club athletes to grace the very welcoming sight of the finishing blue carpet was Michael McGrinder who finished in a tremendous time of 2:56, running a new personal best.

Hot on his heels was his training partner and club athlete Enda McNulty who had a strong run to finish in a superb time of 2:59.

Michael Duncan was next to the finish line in a fantastic time of 3:02 - placing an impressive fifth-place overall in his age category out of 465.

Next was Martin Kelly, an athlete who has been noted for his potential, and he ran a terrific personal best with a smashing time of 3:23, taking five minutes off his previous best time over this distance.

Also earning a personal best was Sean Carlin who had a great run, finishing in 3:30, taking three minutes of his previous best time over this distance.

Marathon man Gerard Campbell finished in the exact same time as last year in 3:34. Next to grace the blue carpet, running a personal best and the first of the club’s ladies was the very determined athlete, Lorraine McGrinder, running a sub four-hour time, finishing in 3:58 and taking 12 minutes off her previous best time over this distance.

A proud club spokesperson said: “The popularity of this race has grown over the years, not just within our own club, but with the entire running community. A total of 20,000 Irish and international participants took to the start line of the most famous marathon on the island of Ireland, and the fifth largest in Europe!

“Whether you speeded to a personal best, crawled to the finish line or anything in between, you should be very proud of your accomplishments. A massive well done to all. To echo the words of John Bingham which are very appropriate for a race of this kind: “The miracle isn’t that I finished, it’s that I had the courage to start”.

Meanwhile, club members are reminded to purchase tickets for this Friday’s club event, held in the Fir Trees Hotel, Strabane, where the club will celebrates its 50th anniversary.

“This night will be about celebrating 50 years of athletics and is not just for club members. Everyone is welcome. It is guaranteed to be a great night.”

The Couch to 5K programme commenced last night (Tuesday) at 6.30pm. This will take place over the course of eight weeks. Training will be held on both Tuesday and Thursday evenings.

“There will be a short information session for those interested before hitting the track for your first steps towards completing a 5K. Please wear suitable clothing and footwear for exercising in. Everyone is welcome.

“Lifford Strabane AC caters for all abilities and all training sessions are coach led. New members are always welcome.”