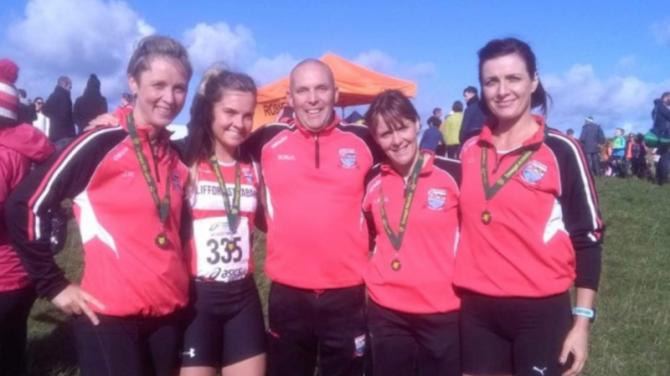 ON what was a glorious autumnal morning, Lifford Strabane AC athletes alongside their coaches and supporters made the trip to Mullaghderg for the Donegal Novice and Uneven Ages Cross-Country Championships hosted by Rosses AC extremely worthwhile, resulting in four team medals and three individual medals.

The course itself was reportedly a true cross-country course combined with a few inclines and sand dunes complemented with spectacular scenery and a fantastic atmosphere making it the perfect day for cross-country racing.

Jessica Moorehead was next to the line with a strong finish, placing eight overall. Dympna Houston finished 11th overall followed by the final scorer for the ladies’ team, Claire Keys placing 15th overall to secure the very commendable silver medal by the tiniest of margins of a mere one point. A fantastic result ladies.

Next up was the Novice Men’s 5K race. Lifford Strabane AC’s novice men’s team not content in letting the ladies team steal all the glory delivered a creditable team performance with the talented Alan McGinley leading the team home, finishing an impressive second overall for a merited individual silver medal and successfully securing the title of team bronze.

Brandon McGrinder was next to the line for Lifford Strabane AC. This young man has made a great comeback from getting both his appendix and tonsils removed during the summer, placing ninth overall. Third scorer for the club was the experienced senior athlete, Paul Kelly producing one of his best race performances this season to date finishing 14th overall, followed closely by the final scorer for the team and his training partner, Kenny Melaugh.

Garreth McCullagh placed 27th overall, Eddie Kelly 29th and making a very welcomed return to racing after being out of action for a lengthy time due to a persistent injury was Lifford Strabane AC’s, Shea Carlin, placing 31st overall. Well done guys on a fantastic all-round team performance.

In the U19 Boys 5K race Lifford Strabane AC was represented by solo athlete, Charlie McElwaine. Charlie had a fantastic run to finish third overall winning an individual bronze medal. All senior athletes are coached by Michael McKinney.

The U13 Girls 2K race, resulted in another team bronze and an individual third placing for the unwavering young Elsa Moore. Elsa was followed by the notable Ashleigh McArdle placing fifth overall and placing 13th was the consistent Ella Costello. Emer McFadden was the final scorer for the team followed by Clara Mullen and Orlaith McCrory. Well done girls.

It was a ‘Team Gold’ for the U17 boys team in the Boys U17 4K race. Following his individual medal from last week the consistent Wilson Craig led the team home with a fifth placing overall followed by Jude McCrossan, Taylor Neilands and  Patrick Gibson to take the title of ‘Team Gold’. Well done boys.

A special mention to Jaime McGinley, Faustina Gibson, Riley Doherty, Stirling Moore, Adam Doran and Matthew Doran who all performed excellent in their respective races. This was a great day of cross-country racing for Lifford Strabane AC.

A club spokesperson said: “T; together, E; everyone, A; achieves, M; more!”

On the roads, at the New Mills 10K hosted by Letterkenny AC, backed by Diver’s Hyundai there was a total of 111 finishers. Lifford Strabane AC was represented by solo runner, Chris Cuskelly, finishing in a fine time of 43:33.

Finally, Lifford Strabane AC club coach and member, Barry McArdle, made the journey to the City of Manchester to represent the club in the ‘fast, flat and friendly’ Manchester Half Marathon. Barry had a great run finishing in a time of 1:41:51.

Don’t forget to purchase your tickets for the 50th anniversary dance on Friday, November 2, in the Fir Trees Hotel when Lifford Strabane will mark the anniversary of Lifford AC which was established in 1968.

Tickets priced at £20/€22 are available from any club committee member. A spokesperson said: “This night will be about celebrating 50 years of athletics and is not just for club members. Everyone is welcome. It is guaranteed to be a great night.”