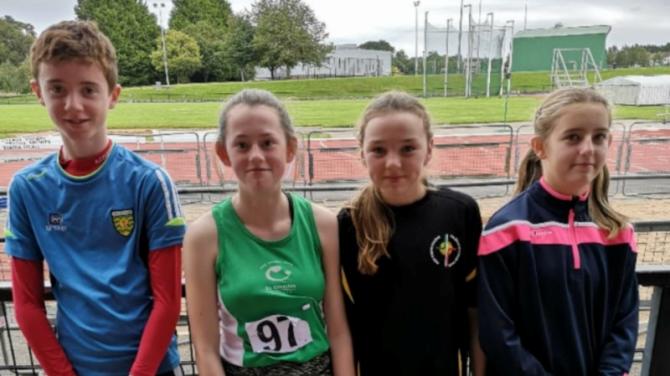 Combined Events (much like the Decathlon/Heptathlon for adults) are a test of skills across a range of athletic disciplines including sprints, hurdles, distance, throws and jumps. Every hundredth of a second on the track or centimetre in the throws/jumps is significant where the athlete racks up points towards an overall combined total to decide on the overall winner.

Ashleigh McArdle, who has another two years in this age group came closest to an All-Ireland qualification, narrowly missing out on the fourth place qualifying position by a mere 20 points, placing fifth overall with a grand total of 2,163 points.

McArdle restored confidence in her high jumping, clearing 1.42m. She had a fine hurdles with 13.20s and a good 800m in 2.45. Harriet McCrossan, an All-Ireland sprint medallist this year finished a credible seventh overall on 2,038 points, a 7.30m shot putt and 1.30m high jump among her best performances.

In a 27 strong field, Ella Costello finished eleventh overall on 1,793 points. Ella, who has another year at this age group had a good 4.35m long jump and a 1.24m high jump.

In the minor boys, Diarmaid O'Donnell had his first competitive outing after recovering from a broken foot back in May. The Scottish Indoor Champion from earlier this year will have another year at this age group can be happy with his sixth placing performance finishing with a total of 1,527 points.

Well done to all these young athletes who will now start into a winter of building strength and endurance prior to the commencement of the indoor season which kicks off in January.

Sunday, September 16, was the day that the world witnessed Olympic champion, Eiluid Kipchoge, set a new world record, winning the 45th BMW Berlin marathon on what prides itself on being the fastest marathon track in the world in an incredible time of 2 hours, 1 minute 39 seconds and Gladys Cherono broke the course record for the ladies to run 2 hours 18minutes 11 seconds - a personal best and the fastest women’s time in the world this year.

The Berlin Marathon also set a record for participants of 44,389 runners from 133 countries. Amidst this record number was Lifford Strabane AC senior athlete, Hugh Patton. Hugh ran this marathon with the sole purpose of raising money for the well deserving charity, Foyle Hospice.

The Lifford Strabane AC athlete was one of the record number of 40,775 finishers in a great time of 3 hours 51 minutes 46 seconds. Well done Hugh!

Registration/membership renewal week took place last week. All members are asked to ensure that they are registered and have their membership paid up to date to avoid refusal in participating in club training sessions.

On Friday, November 2, in the Fir Trees Hotel, Strabane, Strabane Lifford Strabane AC will host the 50th anniversary of Lifford AC which was established in 1968.

A club spokesperson added: “This night will be about celebrating 50 years of athletics and is not just for club members. Everyone is welcome. It is guaranteed to be a great night.”