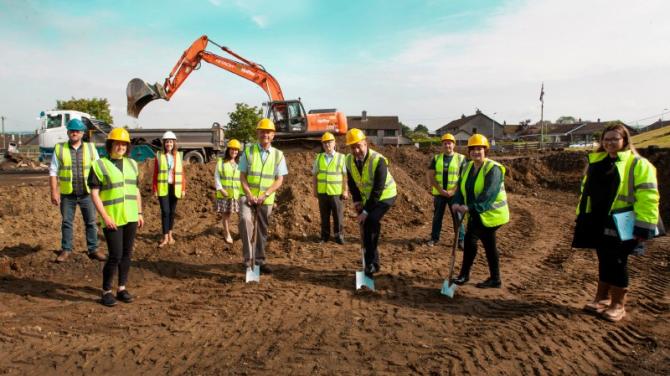 WORK is now underway on a long-awaited new play area in Magheramason.

Derry City and Strabane District Council has confirmed that contractors are now working on the construction of the new facility and free play Multi Use Games Area (MUGA) on the site of the old play area at Mason Road in the village.

The equipment, which will be suitable for children of all ages and abilities, will include a wheelchair accessible ground flush roundabout, an eight-metre high space net, a zip line, two multi-units with towers for younger and older children, climbing nets and slides.

There will also be a variety of swings with adapted swing seats catering for different ages and abilities.

Both the play area and MUGA will be located in a landscaped grass area with tree planting, seating areas, cycle stands and fully inclusive picnic tables and paths, which ties in with council's Green Infrastructure Plan which focuses on utilising natural spaces to provide environmental, economic and social benefits.

The £635,000 project is funded by council and will be delivered by contractors Haffey Sports Grounds.

Susan McElwee, secretary at Magheramason Community Development Association, said there was palpable excitement in the village among families and young children when contractors moved on-site.

Villagers have long campaigned for the need for new and improved facilities given the increasing expansion of the village and new housing being built.

She added: "There is tangible excitement in the local area about this new facility which will be fantastic for all in the community, particularly our children.

"We have moved another step closer now with the work getting underway and I know there will be plenty of excited residents, both young and older, who are counting down the days until it is completed.

"Our thanks to Derry City and Strabane District Council for their continued work in bringing this exceptional facility to Magheramason."

Mayor of Derry City and Strabane District Council, councillor Brian Tierney, visited the site of the new play area and said he was delighted to see the work getting underway on a valued project to the local community.

"I know that the initial news about the project was very warmly welcomed by the Magheramason community and I'm delighted to visit the site as work gets underway on this new play area which will have something for children of all ages and abilities," he said.

"The plans in place of what will be delivered here are very exciting, and it's great that the children in the local vicinity will be able to enjoy physical exercise and each other's company – something that we as council feel is extremely important.

"These areas are so often the heart of a community, and I'm sure the excitement is building around Magheramason now that work has gotten underway.

"It won't be long before this top-of-the-range play area will be buzzing with activity and laughter! Congratulations to all involved."