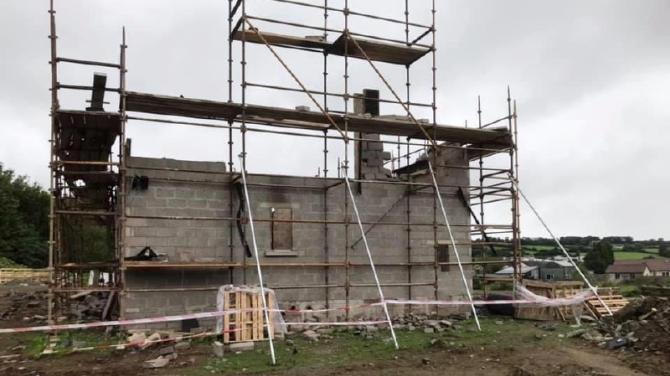 A MAJOR fundraising appeal is underway in support of a local family whose new build home was destroyed in an arson attack just months before they were due to move in.

Police are still hunting for the arsonists who targeted the house which was being built off the Urney Road.

Paul and Dympna Gallagher began building their dream family home back in May but arsonists struck in the early hours of Saturday, August 15 causing tens of thousands of pounds in damage.

Three Northern Ireland Fire and Rescue (NIFRS) appliances were tasked to the scene, just off the Urney Road, to bring the blaze under control.

It confirmed that the cause of the fire was 'deliberate ignition'.

The house had been built up to roof level but such was the extent of the damage that it will now have to be completely demolished.

A heartbroken Mr Gallagher has made appeals on mainstream and social media for anyone with information to come forward.

"We have just lost everything. It's soul destroying... It was a lifetime ambition to get this done," he told Highland Radio.

Despite their desolation, the family are hoping to see their dream home completed.

To this end, a JustGiving page has been set up in recent days in an effort to raise funds to help the family recover and begin all over again.

It states: "The family were almost finished building their dream home when it was burnt to the ground by arsonists.

"Paul and Dympna had put their heart and soul into building this house not to mention their life savings.

"The house just had the roof completed and the windows were due to go in.

"However after the horrific blaze which took three fire appliances to bring it under control, it now has to be completely demolished.

"The family who had planned to be in their new home for Christmas are just heartbroken."

Police in Strabane are seeking information and say they are still trying to establish a motive.

A PSNI spokesperson said: "Police received a report that a home under construction on Urney Road in Clady was deliberately set alight sometime between 2am and 4am on Saturday, August 15.

"The property was extensively damaged by the blaze.

"Police are working to establish a motive for this crime and officers would like to hear from anyone who could assist the investigation. Please call 101, quoting reference 441 15/08/20."

At the time of going to press yesterday (Tuesday), over £1,260 had been raised.