Vacant school site could be used for youth provision - Minister 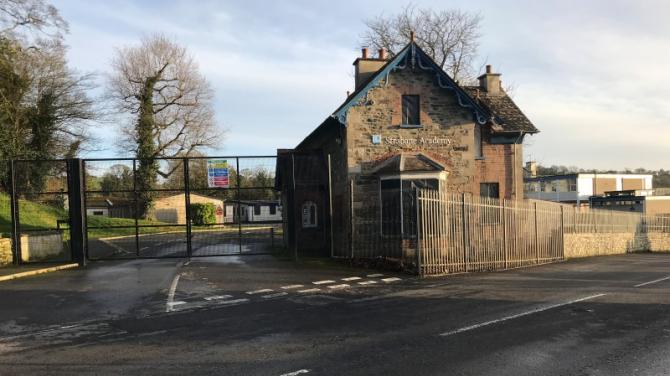 THE vacant school site on Liskey Road is being considered as a potential site for a new youth centre in Strabane, the Education Minister has confirmed.

Peter Weir confirmed the development in response to an Assembly question from Sinn Féin's Maolíosa McHugh.

The West Tyrone MLA had asked the Minister to "detail the Education Authority's (EA) plans for youth provision in Strabane and what sites are being explored for this."

The historic former school site is vacant following Strabane Academy's move to a new multi-million pound build on the Derry Road earlier this year and following repeated vandalism there have been calls to have it protected and brought into use.

The Gatehouse at the entrance to the property was once the home of renowned hymn-writer Cecil Frances Alexander, who composed classics such as ‘All Things Bright and Beautiful' and 'Once in Royal David's City'.

He said: "The Education Authority (EA) Youth Service has increased youth provision in the Strabane area through the appointment of three additional area youth workers and has also secured funding from the Department of Communities for a youth support worker in charge to work with youth work staff to engage young people from across Strabane.

"In addition, the EA has designed a specification for the delivery of faith based youth work in the Sperrin and Derg areas, with funding available of up to £130,000 per year as part of a three year funding cycle."

Turning to the provision of a new youth centre, the Minister said the former school site and the existing Melvin site are being explored for potential development options.

"The EA Youth Service continues to work towards the development of a fit for purpose youth centre in Strabane, where young people can participate in youth-led creative activities and which promotes the ethos of participation and active citizenship.

"These plans can be found in the Derry and Strabane Local Youth Development Plan on the Education Authority website," he said.

"The Youth Service are exploring both short and long term options for the Strabane area. Options relate to opportunities within the Strabane Grammar School site as well as a second option of utilising an existing youth site on the Melvin Road.

"EA Youth Services will continue to work with the community and voluntary sector and will consult with key stakeholders on the development of the new facility."