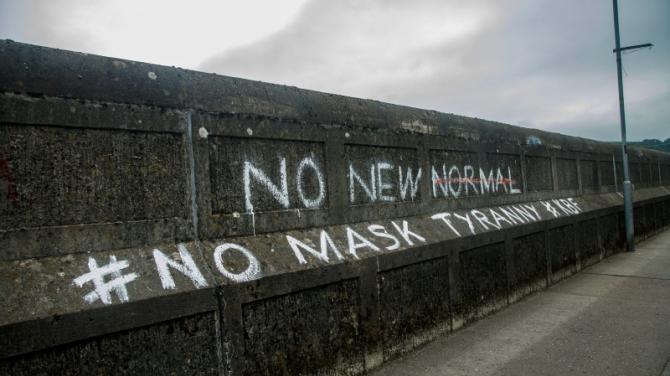 ANTI-face mask graffiti which has been scrawled on the river wall in the town has been condemned as "mindless vandalism".

The graffiti, believed to be have been daubed sometime overnight between Saturday and Sunday, appeared on a wall running along the River Mourne on Melvin Road and adjacent to the local Sinn Féin constituency offices.

The KBF is understood to be a reference to 'Keep Britain Free', a grouping which says it believes the UK government has "acted illegally and disproportionately" over the COVID-19 lockdown restrictions.

Other similar graffiti, which has since been removed, also appeared nearby on a placard.

Black paint was also daubed on a Sinn Féin poster thanking frontline and NHS workers during the pandemic.

Face masks and coverings have become compulsory in all shops and on public transport in a bid to halt the spread of coronavirus.

Reacting to the graffiti, West Tyrone SDLP MLA., Daniel McCrossan told the perpetrators to "wise up".

"I support anyone’s right to protest but I do not and cannot support mindless vandalism of public property which blights our town," he said.

"Whoever did this - wise up. Protest if you like but don’t vandalise or blight our town.

"I’m sure the person(s) responsible wouldn’t want this sprayed across the front of their house. Masks are there to help prevent the spread of the virus."

He added: "As for their KBF hashtag - I’ll say nothing," alongside an eye-rolling emoji.

Local independent councillor, Raymond Barr said that while he too appreciated the right to protest there is no justification for defacing property.

"Everyone has their own opinion on the coronavirus pandemic and the restrictions and that's okay.

"Everyone is entitled to an opinion however defacing the bridge or anywhere else for that matter with graffiti is not the way to express those opinions.

"The town suffers enough with negative images being presented without adding to that negativity."

A spokesperson for Sinn Féin said it had asked Derry City and Strabane District Council to remove the "eyesore" graffiti opposite its offices.

"We are also deeply disappointed that whoever decided to do this in the dark of night also vandalised our poster thanking NHS and key workers," he added.