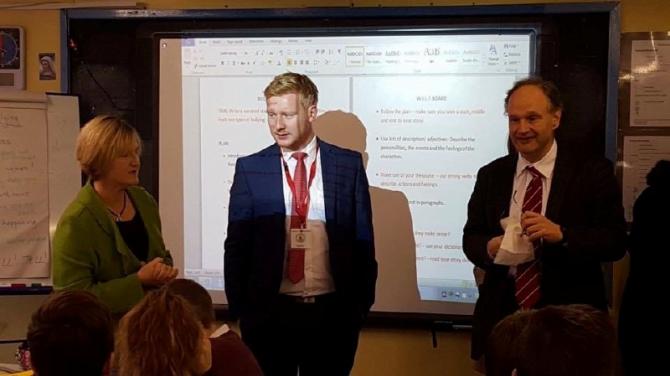 EDUCATION Minister Peter Weir has confirmed that construction work on capital works at a local school are programmed to begin in the next financial year.

The Minister had been asked by West Tyrone SDLP MLA., Daniel McCrossan, for an update on the work planned at St Mary's Primary School, Cloughcor.

Mr Weir visited the school in 2016 at the request of the local MLA to see firsthand the poor condition of facilities including the deteriorating building and satellite mobile units.

The school was subsequently listed for enhancement works.

In response to the Assembly question on the matter from Mr McCrossan, the Minister said: "On May 8, 2018 St Mary’s Primary School, Cloughcor, was included in the first tranche of projects announced to advance in design under the School Enhancement Programme Second Call (SEP2).

"The business case for the SEP2 project at the school has been approved by my department.

"An Integrated Consultancy Team (ICT) was appointed in December 2019 to take the project through the design and construction phases."

He added: "The proposed project is to build a new standalone admin/teaching block built on existing grass play area at the rear of the site and refurbish the existing building.

"It is anticipated that construction work should begin in the 2021/22 financial year."

Following the correspondence from the Minister, Mr McCrossan said that while he welcomes the advancement of capital plans much more needs to be done for this top class local rural school.

“Having brought the Minister to Cloughcor a number of years ago, I’m finally happy that there is a commitment for works to start within the next year to expand this school," he said.

“This work is much needed given the years of neglect it has received from the department.

"This much needed investment should have happened a long time ago as teaching facilities are in need of upgrading."

The local MLA added: “Cloughcor is an amazing example of a local rural school that is constantly delivering at the top of its game year after year.

"I praise the teachers and the other staff at this school for their achievements.

“This hard work and high results need to be recognised by the department as there is a lot more work needed for the school to ensure it’s able to keep delivering well into the future.”