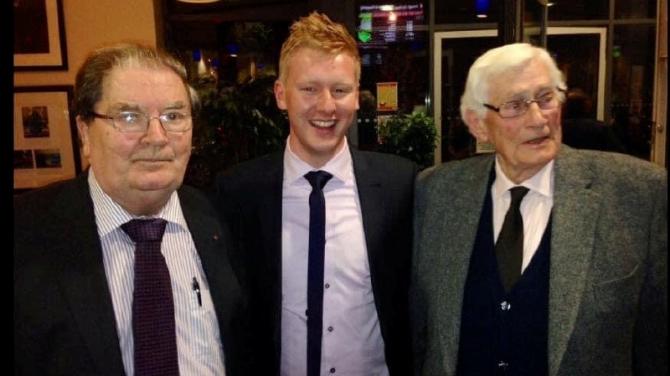 FORMER SDLP leader and peacemaker, John Hume, was a man who helped "better the Strabane area for all", the party's local MLA has said.

Leading the tributes to the man who inspired him to enter politics, Daniel McCrossan said Mr Hume, who died earlier this week, has left a fitting legacy for continued peace in Northern Ireland.

A key figure in the peace process, John Hume was one of the founding members of the SDLP in 1970 and was its leader from 1979 until 2001.

The Nobel Laureate passed away aged 83 on Monday after a short illness.

One of the highest-profile politicians in Northern Ireland for more than 30 years, he helped create the climate that brought an end to the Troubles and is widely regarded for his commitment to peaceful and democratic politics.

He played a major role in the peace talks which led to the signing of the Good Friday Agreement in 1998 and was awarded the Nobel Peace Prize along with then UUP leader, David Trimble, in recognition of that immeasurable contribution.

Mr Hume also has strong ties to Strabane where many of his family still live.

He was a regular visitor to the town during his political career and is also fondly remembered for his days teaching at the former St Colman's High School.

During his time in office he served for a time as MP for the area and championed the need to address its chronic unemployment, lobbying to bring investment to the North West.

Daniel McCrossan, who represents the West Tyrone constituency, described Mr Hume as "an ordinary man who shaped a better future" for Northern Ireland.

"Personally, I am devastated by this sad news and difficult loss. John Hume was the reason I got involved in politics and joined the SDLP. He inspired me to stand election and follow his vision," he said.

"Many in the party and wider Irish society will be heartbroken. But John has left a huge legacy. President Clinton described him as the "the Martin Luther King of Northern Ireland". Tony Blair as "a "political titan".

"Prime Minister Boris Johnson rightly said that "without John Hume there would have been no Belfast or Good Friday Agreement".

"John brought to an end decades of violence and death on our streets. His contribution is immeasurable in every aspect.

The Strabane man continued: “In addition to the peace process, John did so much for so many and for people genuinely struggling in life.

"He set up the Credit Union, opening up finance to many who, up until then, had very limited access to loans. John set up the Housing Executive and in doing so, he provided thousands of people from across the North with homes to raise their families.

"John brought investment and jobs into the North West when violence was erupting in our streets. John was involved in countless more initiatives and developments right across the North and North West where we have all benefited from today.

"It’s important that we never forget his contribution to Ireland and that we all aspire to having his own values. John was a titan of Irish and world politics."

Throughout his long career, the former SDLP leader spent decades fighting and winning elections to different parliaments at Stormont, Westminster and Brussels.

"From 1983 to 1997 when the boundary for the Foyle constituency changed, John also represented the people of Strabane as MP where he had an office and worked to deliver for the people of this area.

"Many local people from across this area have spoken of their great admiration for John and about how he helped better the Strabane area for all.

“Today my thoughts are with the wider Hume family. To John's wife Pat, his sons and daughters, Terese, Aine, Aidan, John and Mo and all the Hume’s in Derry, Strabane and further afield.

"Ireland has lost a giant among its people. An ordinary man who shaped a better future for us all here."