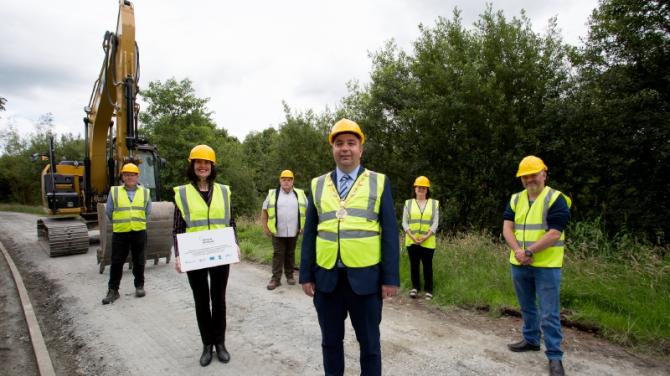 A MAJOR refurbishment project at Strabane Canal is advancing with completion expected by mid September.

The work, which began last month, will facilitate recreational walking and canoeing from the mouth of the canal at Ballymagorry to Gribben Quay at Bready.

Reopened in 2012 by the then Strabane District Council, the towpath area running alongside the canal has been a popular recreational spot for runners, cyclists and walkers and during the coronavirus lockdown, it's popularity had soared.

The ongoing rejuvenation at the beauty-spot, which aims to improve facilities for both land and water users, will entail extensive resurfacing of the 1.2km of towpath from Greenlaw Road to the Foyle, fencing improvements and new signage and seating areas.

At The Gribben the plans include providing improved camping facilities and adding new signage and seating.

Access to the towpath has been closed to the public since work began.

The works are part of the Rivers Project, a rural co-operation project involving a partnership between the Loughs Agency, Derry City and Strabane District Council, Donegal Local Development Company and Causeway Coast and Glens Council, as well as partners in Latvia and Estonia

Providing an update on the work, Michael Savage, greenway development officer with council, explained: "This is the Rivers Project which has got two elements; the Strabane Canal and the Gribben Quay.

"The main element at Strabane Canal is the resurfacing of the Canal Towpath; 1.2kms all the way down to the River Foyle with some improvements to signs, six seats to go in and some fencing improvements.

"We are making good progress now. We have got the kerbs in place, almost the entire way.

"The first tarmac will go down in the next week or so. We are hoping to open by the middle of September."

William Doherty Construction Ltd has been appointed to undertake improvement works at the council-owned site as well as the Loughs Agency-managed quay.

Mayor Brian Tierney, paid a site visit to the improvement works at the tow path last Wednesday where he was updated on the work.

Speaking during the site visit, Mayor Tierney said the project is a welcome step in promoting the use of outdoor space among the public.

"The project will hopefully be opened early/mid September. It will be great to see people out here enjoying the walkway in Strabane.

"I'll delighted to come back and see it actually open," he stated.

The Mayor said that the project, when completed, will be another valuable addition to the district's greenway newtork

"It's great to see it at a time when we are trying to get people out of cars and exercise more freely.

"It's a great opportunity for people in Strabane to be out exercising, walking, spending time with their families and enjoying the lovely scenery around here," he added.

The project is estimated to cost £225,000 and is being part funded by council, the Loughs Agency and the Northern Ireland Rural Development programme 2014-2020 from the Department of Agriculture, Environment and Rural Affairs and the European Union.

"The project will deliver on several of the key priorities in the district’s Green Infrastructure Plan, including the provision of high quality multi-functional green and blue spaces, ensuring green and blue spaces are a driver for tourism and economic growth, and developing the health and well being benefits of Green Infrastructure," Mayor Tierney added.