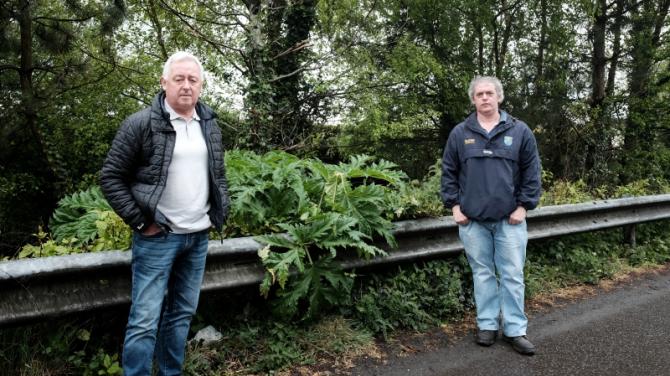 LOCAL people are being urged to be vigilant to the presence of a dangerous and invasive plant present on some of the town's main throughfares.

Commonly found close to river banks where its seeds are transported by the water, Giant Hogweed has also been found growing along areas of the town including the Great Northern Link (bypass), Lifford Road and Upper Main Street.

The highly toxic plant is not native to these shores. It was first introduced as an ornamental plant in the 19th century where it escaped and naturalised in the wild. Each plant can produce up to 50,000 seeds which can survive for up to 15 years.

The sap of Giant Hogweed can cause burns. It contains furocoumarin, which makes skin extremely sensitive to sunlight (phytophotodermatitis).

If the sap gets onto your skin and then you are exposed to sun, your skin can blister badly and blistering can recur over months and even years. This is known as phytotoxicity.

Local community activist and environmentalist Myles Donnelly has been highlighting the issue in the hope that the public will familiarise themselves with the plant and thus avoid serious injury.

He explained: "This is a very toxic plant. If you break the leaf or the stalk and get the sap on your skin it can cause severe photosensitivity and scarring to your skin.

"This can stay with you long after you've had the incident. If you get it on your face or hands you might not be able to go out in the sun for years after.

"At this time of the year you will start to see them coming up. They have big raggy leaves and thick stalks.

"The white flower heads that eventually grow are full of seeds that detach and blow about the place looking for a new home and would need to be destroyed."

Myles says he is particularly keen to highlight the issue during the current pandemic when more people are out walking.

"It's most common on the river banks as the water carries the seeds downstream but seeds are now getting onto roadways. The Hogweed is starting to appear in our streets too, along the bypass and Lifford Road. Some of it is fairly small at this stage but still toxic and can grow up to eight foot or more.

"Because of the virus people are out with their family and if you're going along with a child on a bike or pram they could easily reach their hand out and pull at the leaf or brush against the plant," Myles said.

"I have friends who work for Rivers Agency and if they come across it they have to wear full protective gear to deal with it because it's so toxic.

"I have been working on this issue for the last 18 or 19 years. I started with Brian Hegarty who was part of the Greenbrae Conservation Group. It needs to be publicised every year to keep getting the message out about how dangerous it can be.

"If people recognise the plant and we can spread awareness of it, then hopefully that will prevent people from getting injured."

Strabane independent councillor Raymond Barr said he has been liasing with council on the issue.

"Giant Hogweed proved to be problematic in the district last year so a couple of months back I enquired as to whether anything was to be gained by treating it early and before it flowered this year.

"At that time, I was told that plans were in place by Environmental Health to treat it in the spring so I'm hoping that will go ahead now.

"It has spread like wildfire around the town. It's a very dangerous and toxic plant and with people out walking more now with lockdown there's a strong possibility that people may come into contact with it so I will be chasing it up with council," he said.

If you come into contact with Giant Hogweed, cover the affected area immediately to avoid exposure to the sun.

Wash the area with cold water. If blistering occurs or the contact was with the eyes you should seek medical advice.

A spokesperson for Derry City and Strabane District Council said that it is responsible for raising awareness, conducting surveys and controlling invasive alien species such as Giant Hogweed on council owned lands only.

"The council is of the view that Giant Hogweed along footpaths would be the responsibility of the Department for Infrastructure. The council does provide advice to private landowners in relation to the safe control of the species," she said.

The spokesperson added that council is very much aware of the serious threat associated with Giant Hogweed to people, particularly children, causing severe and damaging reactions when in contact with human skin.

“It is the responsibility of the land owner to control these species. Council conduct surveys, management plans and implement control programmes, where invasive species are growing on council property.

"We would urge private landowners to control these harmful species to minimize the risk they pose to the public," she said.