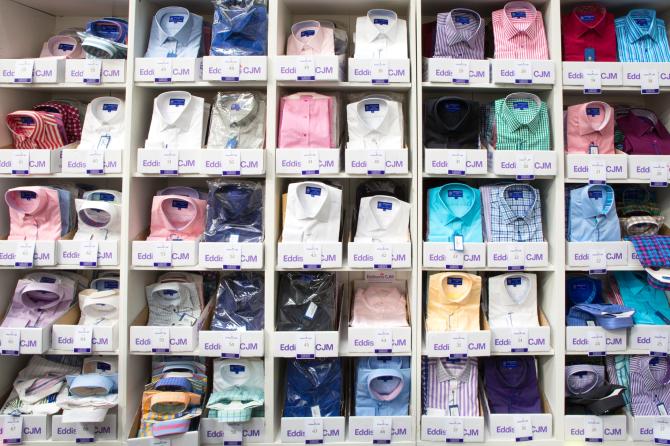 A STRABANE-based Royal shirtmaker will hit the end of the road next week when its entire remaining stock goes under the auctioneer’s hammer.

Grosvenor Shirts, holder of a Royal Warrant as outfitters to the Queen, has gone into liquidation, closing the doors at its manufacturing centre in the Abercorn Factory and its flagship store on Jermyn Street in the West End of London.

Handmade shirts with a retail value of over a hundred thousand pounds have been removed to the North Lincolnshire auction centre of Eddisons CJM where they are to go under the hammer in an online auction that ends on Wednesday of next week.

Eddisons CJM director Paul Cooper said: “It is an unusual auction that is expected to attract a lot of attention. Luxury shirts, hand made by the Royal shirtmaker, are not something that you’ll see in the saleroom so often.”

Grosvenor Shirts was a private limited company that was founded in 1999 to compete at the top end of the market. Its shirts were designed in London and handmade at the historic Abercorn Factory in Strabane.

The business achieved spectacular success, initially with a concession in Selfridges, followed by a stand alone store in Mayfair and then the opening of their flagship store on Jermyn Street in 2013.

That was also the year that the company gained the Royal Warrant.

Paul added: “Unfortunately neither its its positioning at the luxury end of the marker nor its status as one of the last truly British shirtmaking companies has saved it.

"The company went into liquidation at the end of February and Begbies Traynor, the specialists winding up the affairs of the business, have now instructed us to sell off stock from both Jermyn Street and the Abercorn Factory.”

In total the auction extends to 200 lots.

The fully illustrated auction catalogue is available at www.eddisonscjm.com.

The online auction is scheduled to end at noon on Wednesday, May 20.