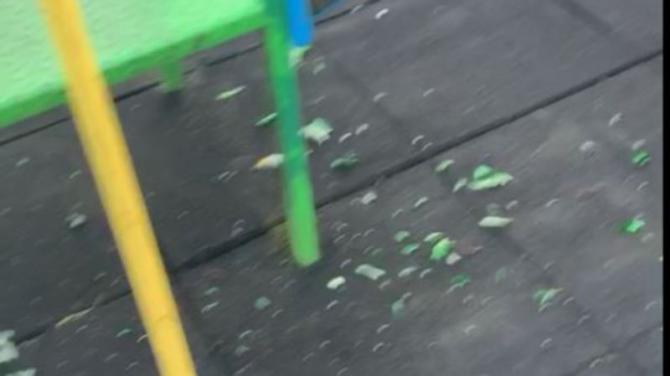 A RECRATIONAL park in Castlederg popular with young families has been targeted by vandals.

A mother who had taken her child to Mitchell Park to play last week was greeted with a scene of broken glass and rubbish.

Such was her dismay that she took photographs and videos of the unsavoury scene which greeted her last Monday morning and she then subsequently forwarded them to local Ulster Unionist representative, Derek Hussey.

Mr Hussey said there has been ongoing issues with anti-social behaviour in the area including young people congregating for 'drinking sessions'.

He said: “Within this rubbish broken glass is clearly seen on steps and around the protective rubber mattings beneath the play items in the play park.

“Local folk have been reporting growing anti-social behaviour at Mitchell Park over the past while including youngsters having drinking sessions in the area.

“It would seem reasonable to assume that the rubbish and broken glass have emanated from the same source.

“Many have expressed their dismay and outrage around this issue but particularly the dangerous presence of broken glass being left in the play park area that could result in serious injury to children.”

Mr Hussey said he had contacted police and Derry City and Strabane District Council on the matter and urged anyone with similar concerns or information to also contact the authorities.

“Clearly it would be best if those engaged in these activities would stop but, if not, they should be made amenable to the authorities to be dealt with,” he added.