No decision made on future of former school site, councillors told 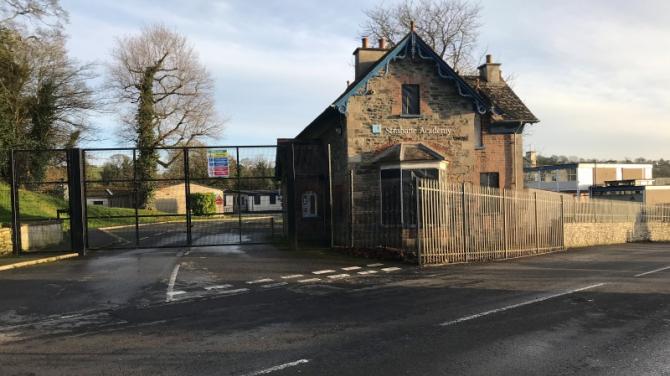 THE Education Authority (EA) has told Derry City and Strabane District Council it is still considering options for the future of the Strabane Academy building at Liskey Road.

The historic site was once the home of renowned hymn-writer Cecil Frances Alexander, who composed classics such as ‘All Things Bright and Beautiful”, but its future remains unclear after the school vacated earlier this year to move to a new state-of-the-art build on the Derry Road.

Last month council approached the EA expressing an interest in acquiring the site.

It followed the unanimous support for a motion tabled on the issue by Strabane independent councillor Raymond Barr and subsequently amended by Sinn Féin's Ruairí McHugh in January urging council to investigate the possibility of acquiring the site with a view to releasing it for the purpose of addressing social need.

The motion stated: "That this council contacts the Education Authority Northern Ireland to investigate the possibility of acquiring the site left vacant by the closure of Milltown Grammar School at Liskey Road, Strabane, with a view to developing the site for purposes of addressing local social need priorities including potential for sport, play and recreational facilities in line with council’s Play and Playing Pitch Strategies and also to write to the Department for Communities to notify them of the potential availability of the site which could also be utilised for social housing."

At Thursday's monthly meeting of council, a response to the motion from the EA was tabled for members' consideration.

"The EA is currently considering the future need for the site once it is fully vacated by Strabane Academy," said Dale Hanna, EA operating director of operations and estates.

"Should there be no future need for the former Strabane Grammar School site and buildings the EA will formally dispose of this asset in line with Land and Property Services Central Advisory Unit's publication entitled 'Disposal of Surplus Sector Property in Northern Ireland'.

"If no interest is expressed, the EA will move to dispose of the site on the open market."

Speaking at Thursday's monthly meeting of council, Sperrin DUP cllr Alderman Maurice Devenney said: "I welcome that they have responded and they have clearly stated there the procedure moving forward on it."