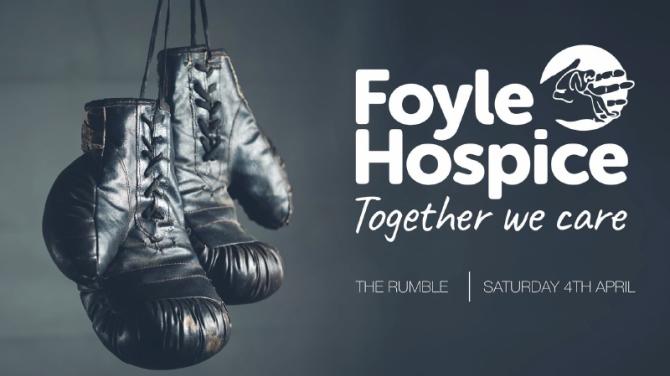 ONE of Strabane’s biggest fundraisers is making a return to raise some much-needed funds for charity and the coveted tickets for the event go on sale this weekend.

Preparations are underway as the Fir Trees Hotel prepares to host the charity boxing event ‘The Rumble’ in aid of Foyle Hospice.

The white collar boxing showpiece, which has previously raised thousands of pounds for Macmillan Cancer Support, the Koram Centre and Knockavoe School and Resource Centre, will be held on Saturday, April 4.

Organisers are hoping to eclipse the monies raised from past events and this year’s event is shaping up to be quite the night as a whole host of boxers get set to go toe-to-toe in the ring!

To date, 16 bouts featuring some of Strabane's best-known races, have been confirmed and the brave participants are now busy preparing themselves ahead of the April showpiece.

The organisers have confirmed that the sought after tickets will be released in two batches this weekend.

The event is always a sell-out so anyone interested in getting themselves a seat at one of the town's best and biggest charity nights are urged to snap theirs up quickly.

A spokesperson for The Rumble said: "This year’s chosen charity is the Foyle Hospice. It’s safe to say almost everyone who is reading this will know someone or have someone related to them that have suffered from cancer or other illnesses.

“Foyle Hospice provides ongoing palliative care services for patients with cancer and other life limiting illnesses while supporting their families and loved ones in the North West of Northern Ireland.

“It costs approximately £3 million per year to maintain the existing services which are free to patients and relatives. Approximately 30 per cent of the total annual running costs from the Health and Social Care Board.

“The gap in funding means that they are heavily dependent on grant awarding bodies along with the good will and generosity of the local community.

“Once again we hope to raise as much money as possible for this amazing charity and we have no doubt that we will succeed in doing so again.”

Tickets for this not-to-be missed event will go on pre-sale on Friday night at 7.30pm in the reception area of the Fir Trees Hotel. They will be sold on a first come, first serve basis.

A total of 150 tickets will be up for grabs and are limited to four per person and cost £15 each.

The remaining tickets will go on sale on Saturday morning at 10am when there will be a limit of six per person.

"Only a very limited amount tickets are for sale for this event and they don't sit around so be quick," the spokesperson added.

See the Facebook page - The Rumble - for more details of the event including the line-up of who is fighting who.