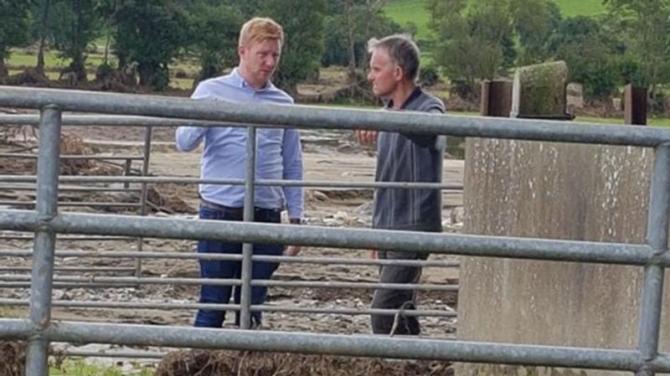 SDLP MLA., Daniel McCrossan, says the minister of Agriculture, Environment and Rural Affairs must right a "grievous injustice" and issue a ministerial direction by providing a funding package to farmers who suffered financial loss after the flooding in August 2017.

The West Tyrone MLA was speaking following an exchange between himself and the minister Edwin Poots during ministerial questions in the Assembly on Monday.

Mr Poots said he is actively considering the merits of introducing a hardship scheme for farmers who suffered significant financial loss but that a a final decision has not yet been taken.

Mr McCrossan says he is optimistic that funding to recompense those in the Glenelly Valley will be forthcoming.

He said: “While no decision has yet been made, I am optimistic following the minister's comments that he is considering issuing a ministerial direction to provide a funding package to those hard hit by flooding in the Sperrins.

“The minister is from an agricultural background himself and knows full well of the extent this damage has caused and how hard it can hit local farms.

“I take some comfort in the fact the minister has not ruled out a funding package and will continue to lobby for those farmers who feel abandoned by the system. He now needs to make the right decision and I will continue lobbying until that happens.”