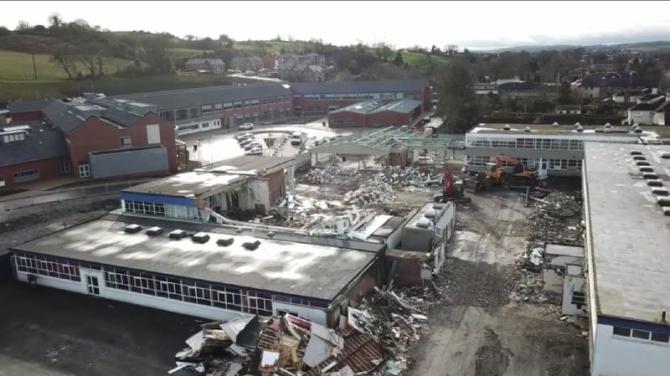 THE development of the new multi-million pound education campus at Strabane Academy has entered into phase two.

Work has now begun on demolishing the old Derry Road school build, which was the junior campus of the school and formerly Strabane High School, to facilitate the construction of a new entrance.

Currently a temporary entrance is being used at the junction onto the slip road into the town centre until the work is completed.

The slip road has been closed to traffic approaching the town from the Ballymagorry direction on the main A5.

Posting drone image of the work on its Facebook page, a school spokesperson said: "We are loving being in our new school build and phase two has commenced on site.

"It is sad to see the Derry Road campus being demolished however we know we have a bright future."

The opening of the £21.47 million school, just behind the old school site, comes over eight years after the school began life as Strabane Academy.

Since the merger of Strabane Grammar School and Strabane High School back in September 2011, the school has existed on the two campus’ between Derry Road and Liskey Road.

Staff and pupils moved into the impressive state-of-the-art facility in January with the latest phase of the work continuing at pace and with a completion date anticipated for summer.

As work continues, all motorists exiting the grounds are reminded again that there is no right turn onto the Derry Road and that vehicles must turn left to avoid congestion and to ensure the safety of pupils.

While the Derry Road campus is being demolished the future is not so certain for the school's historic Liskey Road campus.

The site is now vacant following the school's move last month and was the subject of a recent arson attack and vandalism within a week its closure.

The Education Authority (EA) has confirmed that options are being considered for its future use and that should there be no need for the site and buildings it will formally dispose of the asset.

Derry City and Strabane District Council has also agreed to contact the EA to investigate the possibility of acquiring the site with a view to releasing it for the purpose of addressing social need.

Omagh-based Woodvale Construction have been taking forward the new school which has been designed by architects Samuel Stevenson & Sons as a two-storey building to provide a post primary school for 700 pupils with classrooms and support accommodation.